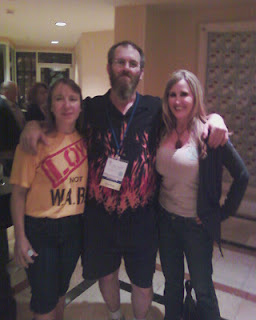 …[I]t was great to get to spend some time (not nearly enough time, but some) with Chris Lempa, James Tuttle, Gary Chartier and other left-libertarian luminaries at the Libertarian National Convention over the weekend.

After putting out the Facebook announcement for the “Radicals Luncheon” on Saturday, I got more and more worried about attendance. I was hoping for 30, but I was afraid it would be ten. Shouldn’t have worried — I stopped counting when I reached 50. It was an entirely social event, no presentations, etc., just fellowship and socializing.

The turnout put a spring in my (backache-plagued) step when I left the luncheon to attend the organizational meeting of the Libertarian Non-Intervention Caucus. Within 24 hours of our formation, we had not only successfully lobbied for the defeat of a mildly hawkish change to the LP’s platform, but saw the existing plank replaced with an even stronger non-intervention statement written by Rebecca Sink-Burris (who won my vote for at-large LNC with her proposal — so far as I know she is not affiliated with the caucus, btw). Thanks to George Phillies for bringing the caucus together.[..]