Neanderbill and I joined the NC state delegation to the Libertarian National Convention.

Here is a brief video of our arrival at the bar last night, greeting our fellow Libertarian Party members.

[Ponda Baba gives Neanderbill a rough shove and starts yelling at NB in an alien language which NB doesn’t understand]
Dr. Evazan: [explaining] He doesn’t like you.
NB: Sorry.
Dr. Evazan: [grabbing NB] *I* don’t like you either. You just watch yourself. We’re wanted men. I have petitioned for ballot access in twelve states.
NB: I’ll be careful.
Dr. Evazan: You’ll be de-credentialed!
Obi-Wan: [intervening] This gigantic one’s not worth the effort. Now, let me get you something.
[Dr. Evazan shoves NB across the room and pulls out a quorum call]
Bartender: No quorum calls! No quorum calls!
[Obi-Wan pulls out his microphone, severing Ponda Baba’s eardrum with a point of parliamentary inquiry]

Okay, no, seriously, here are some pix. Here is the view from the floor of the big screens up front. 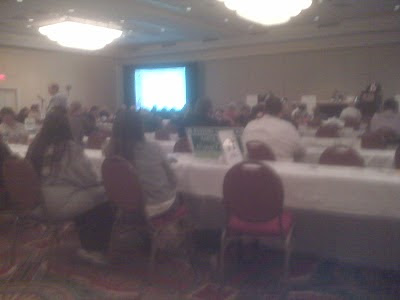 And here is David Nolan (yes, the chart guy, and founder of the LP) making a point. 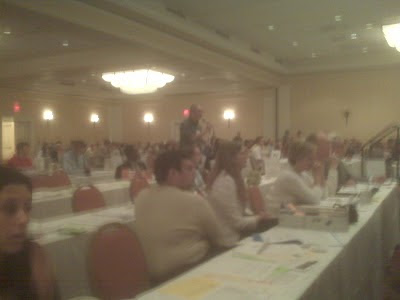 Oh, and don’t forget StarChild. StarChild is the best.

Whoa. The LP National Convention was pretty darned tiring. Didn’t help that we had to drive Raleigh to St Louis to Raleigh. That’s 1,700 miles for the round trip.

But we got to see some great stuff. I enjoyed giving the main banquet speech (Neil Boortz out, Munger in! Strange…), and Dr. Mary Ruwart did a terrific job raising big $$ for ballot access.

We elected a new LNC.

And, of course, Starchild was in the house. This outfit, I thought was a tour de force. (Picture from Mike S., who is the one wearing the blue sirt, and no top hat). 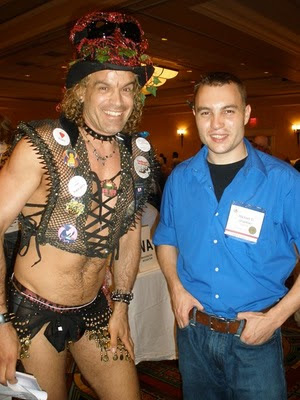 I feel I have to explain about Starchild. He is beloved, and rightly so. Sure, the way he dresses is a bit over top / under the bottom / whatever you want to say. But he is amazingly charismatic, gentle, and serious. His message is of real brother / sisterhood, and that you have to look past the outside, whether it’s skin color or feather boas (or, as in the picture above, a big black bow tied like a present over a black silk thong) to see the real person. If that is not the core of libertarianism I don’t know what is. Starchild is the best, seriously. (And the ladies in our delegation were pretty vocal in their admiration of Starchild’s hard work at the gym, and were glad that he was willing to share it publicly. Some things are complex, and some are simple. Starchild is mostly pretty simple, in the best possible way…)