The following was posted on the Independent American & Constitutional Review on June 27, 2013 by Joshua Fauver. Alan Keyes, a former cabinet official under the Ronald Reagan administration and several-time Republican candidate for office, including president, saught the Constitution Party’s presidential nomination in 2008, coming in second place to Chuck Baldwin, with 24.36% of the vote. He left the CP afterwards and founded the America’s Party, a small right-wing party, and ran as its presidential candidate in the general election, receiving over 47,000 votes. 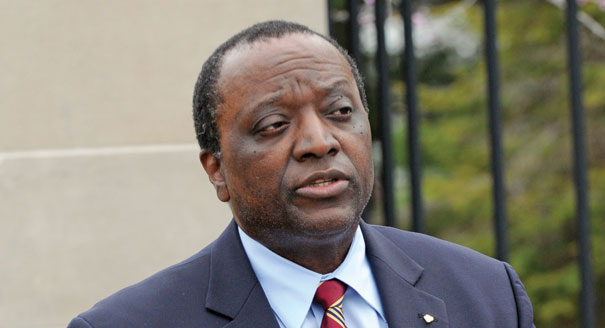 The following was originally posted on Alan Keyes’ blog,”Alan Keyes is Loyal to Liberty ” on June 27th, 2013.

“But though this be a State of liberty, yet it is not a state of license; …The state of nature has a law of nature to govern it, which obliges everyone; and reason, which is that law, teaches all mankind who will but consult it….” (John Locke, The Second Treatise of Government, Chapter II)

“Tell me, friend, when did Saruman the Wise abandon reason for madness?” (Gandalf to Saruman,Lord of the Rings Part I, The Fellowship of the Ring“)

They do this in order to give a powerful elitist minority the opportunity to undermine the house of liberty altogether. Furthermore, they implicitly legitimize the notion that the irresponsible will of the people is, in and of itself, the source of sovereign authority. This paves the wave for a “tyranny of the majority”, which in practice becomes the forceful tyranny of an elitist clique, ruling without constraint over the all individuals, including the majority in whose name they have usurped lawless, absolute power.

God knows under the influence of what corrupting power, a majority of the U.S. Supreme Court Justices have now openly abandoned the discipline of reason. In their decision in the United Statesv. Windsor, they refused to apply the law laid down by Congress in the Defense of Marriage Act (DOMA). Their questionable insistence on assuming jurisdiction in the case suggests that their decision is part of a larger agenda. It is the opening gambit in a design for despotism that entails a manifestly self-contradictory jurisprudence because it aims to overthrow constitutional self-government.  Except we keep this malicious objective in mind, the Windsor majority’s opinion is so evidently unreasonable that it warrants the suspicion that these Justices have gone mad.

The 14th Amendment to the Constitution declares that “No state shall…deny to any person within its jurisdiction the equal protection of the laws”.  On account of this language, the Justices in theWindsor majority pretend that the Federal Legislature has no power to secure the properties with which the “laws of nature and of nature’s God” endow the human family, in order to perpetuate the species. Yet the Constitution’s 5th Amendment declares that “No person shall… be deprived of life, liberty or property, without due process of law, nor shall private property be taken for public use, without just compensation.”  What compensation can justly requite human beings for government action or inaction that deprives them of the bond of mutual obligation, antecedent to all government whereby, in the first instance children belong to their biological parents and those parents belong with their children?

This mutual belonging is the natural paradigm of all private property. It is the defining ground of the first civil society, the family. It makes clear, in the experience of all humankind, that peace is the default condition of human social life. Arising from the consensual and voluntary observance of God-endowed natural law, this peace secures the preservation and perpetuation of humanity, individually and as a whole.  By their decision the Windsor majority ignores, contradicts and undermines the effective authority that is a God-endowed property of the natural family. It is the institution whereby, in view of their first, very vulnerable condition as helpless infants, the natural law makes reliable provision for the preservation and security of all human beings. Moreover, the effective operation of the natural family, which is the paradigm of government by the consent of the governed, is by and large what makes it possible to implement the principle of consent as the basis, in fact, for orderly civil self-government.

So, by attacking the God-endowed authority of this natural institution, the justices directly attack the common good of the whole society. They set the coercive force of human law above the consensual force of natural law. This makes coercion the basis for government, rather than consent. It substitutes “might makes right”, i.e., the principle of tyranny, for the “consent of the governed”, which is the principle of constitutional self-government.

Moreover, the majority in United States v. Windsor simply ignores the fact that when the U.S. Congress  enacted the DOMA, it acted in defense of the God-endowed unalienable rights of the natural family. The Windsor justices assert that that the “Federal Government uses the state-defined class…to impose restrictions and disabilities.” They assert that the DOMA is “seeking to injure the very class New York seeks to protect…. ” They assert that DOMA arises from “a bare congressional desire to harm a politically unpopular group.” This entire line of attack implicitly denies and disparages the unalienable rights of the natural family, and Congress’s Constitutional duty to respect them. In doing so the Windsor decision does what the U.S. Constitution’s 9th Amendment explicitly forbids. Eschewing the logic of that Constitutional provision, it rejects the premise of God-endowed unalienable rights.

Ever since the American people first declared their independence, the premise of God-endowed unalienable rights has been essential to their identity as a free people.  That premise is the basis and justification for the assertion that government exists to secure unalienable rights.  And it is in the context of that fundamental purpose of government that America’s founders asserted the principle that the just powers of government are derived from the consent of the governed.  The majority’s decision in United States v. Windsor is therefore a radical attack against the form of government that respects and implements that indispensable principle of constitutional self-government.

In its abortion jurisprudence the Court relies on the notion that governments at all levels in the United States are obliged to respect the provisions of the bill of rights.

This is the famous (or infamous) incorporation doctrine, erected with reference to the language of the 14th amendment. The doctrine allows the U.S. Supreme Court to assert a Constitutional duty to safeguard the individual rights of persons against action or neglect by the State governments. But if that doctrine allows the Federal government to override the longstanding practice of respecting the will of the people of the States, respectively, when it comes to abortion or the practice of homosexuality, why does that permission suddenly disappear when the U.S. Congress acts to safeguard the God-endowed unalienable rights of the natural family?

Does the majority in the DOMA decision want us to believe that the opinion of judges not elected by the people, which relies on illogically self-contradictory jurisprudence with respect to U.S. Constitution, nonetheless supersedes the authority of a Congressional majority relying on the duty to implement the explicitly stated constraints of the 9th Amendment? Without the Constitution, the justices represent no one but themselves, whereas the Congressional majority can claim to representthe present will of a majority of the whole people, the very will that speaks with the voice of overall sovereignty in the language of the U.S. Constitution? On what grounds does the sovereign will of the people in their respective states override the sovereign will of the American people as a whole when it comes to upholding the unalienable rights the just powers of all governmental authorities are supposed to secure? If “to secure these rights governments are instituted among men”, neither God nor the Constitution authorizes government at any level to permit attacks upon them, even in the name of longstanding practice and tradition?