Joshua Fauver is the vice-chairman of the Clarion Call to Unite Committee (CCTUC), an organization that aims to unite all right-wing and constitutionalist third parties under a single banner. Fauver is also the Southeast Regional Coordinator for the Robby Wells 2016 independent presidential campaign.

An Analysis of the DOMA Decision 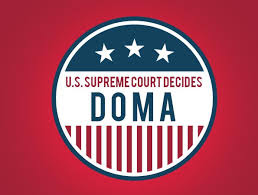 On Wednesday, June 26, 2013, the United States Supreme Court rocked the nation when they decided on a 5-4 vote that the Defense of Marriage Act (DOMA, which barred the federal government from recognizing same sex marriages) was unconstitutional. To many the decision came as a shock and left them stunned, others were overjoyed. This decision by the Supreme Court is probably the most divisive decision since Roe V. Wade.

DOMA was signed into law by then U.S President Bill Clinton (Democrat) in 1996. It prevented same sex couples, whose marriages were recognized by their home state, from receiving the hundreds of federal benefits available to other married couples under the federal law. Interestingly enough, during the Obama administration, the Justice Department initially defended DOMA in court despite the administration’s desire to repeal it.

The following was wrote by Supreme Court Justice Anthony Kennedy in the majority opinion:

“The federal statute is invalid, for no legitimate purpose overcomes the purpose and effect to disparage and to injure those whom the State, by its marriage laws, sought to protect in personhood and dignity. By seeking to displace this protection and treating those persons as living in marriages less respected than others, the federal statute is in violation of the Fifth Amendment.”

For those of you who are not constitutional scholars the fifth amendment of the United State’s Constitution reads as follows:

“No person shall be held to answer for a capital, or otherwise infamous crime, unless on a presentment or indictment of a Grand Jury, except in cases arising in the land or naval forces, or in the Militia, when in actual service in time of War or public danger; nor shall any person be subject for the same offense to be twice put in jeopardy of life or limb; nor shall be compelled in any criminal case to be a witness against himself, nor be deprived of life, liberty, or property, without due process of law; nor shall private property be taken for public use, without just compensation.”

So the particular text that Justice Kennedy is referencing is “… nor be deprived of life, liberty, or property, without due process of law…”

In his dissent, which he read from the bench, Justice Antonin Scalia wrote:

One might note that Justice Scalia, along with Chief Justice John Roberts, Samuel Alito, and Clarence Thomas, did contend that the court had no jurisdiction to even hear the case, because the Obama administration already had concluded the 1996 law was unconstitutional and thus there was no dispute for the court to resolve.

Now that you’ve heard the history of the case, a brief one I admit, I will present my views on the matter. I will contend that the Defense of Marriage Act is unconstitutional. The truth of the matter is that the federal government of these United States is not granted any authority over marriage in our constitution. (The supreme law of our land.) If one understands that and understands our tenth amendment, which reads ” The powers not delegated to the United States by the Constitution, nor prohibited by it to the States, are reserved to the States respectively, or to the people.”, paired with the text from the fifth amendment (“… nor be deprived of life, liberty, or property, without due process of law…”) Then one understands that the federal government cannot, no matter what bill congress passes, deny rights to a marriage that a state recognizes. The constitution gives them absolutely zero authority to do so.

My understanding of our constitution leads me to believe that while the federal government has no authority whatsoever over the institution of marriage, state governments do. I do not mean to say that state governments can wield unchecked power over marriage, but rather that with the consent of the people, state’s can define marriage for themselves. Take California’s proposition 8 for example; a proposition was placed on a statewide ballot and passed, passed the state legislature, and was then signed into law by the governor. This is the way it should be handled, and according to my understanding of the constitution, the federal government should respect the various state’s decisions on the matter. (This is what makes DOMA unconstitutional.)

This matter has not been one entirely fought on grounds of legality though. (or it would have been settled far earlier than this. DOMA would never have passed had it been only a legal battle.) This fight has been one of morality, namely a battle fought by the evangelical Christians. I’ll admit I myself am an evangelical christian, and I do believe that in the area of morality I find homosexuality to be wrong. I believe wholeheartedly and without a shadow of a doubt that homosexuality is a sin. Having read and studied the Bible I find this conclusion to be inescapable. (Leviticus 18:22, Leviticus 20:13, 1 Corinthians 6:9-10, Romans 1:26-28) But does an action being a sin mean that it should be necessarily illegal? Certainly not!

You see, while I am a devout Christian, I understand that God gave man free will. Ultimately it is our choice whether we will serve God or not. In the same way it is our decision whether or not we will choose to live one lifestyle or another one. The areas of morality and legality are totally separate from one another. For instance, fornication, adultery, pornography, masturbation, and lust are all, according to the Bible, sexually immoral, yet they are not illegal. When getting married one does not fill out a questionnaire concerning those aspects of your life? Why? Because in those terms it is understood that the areas of morality and legality are separate. It is my opinion that on the issue of homosexual marriage that the issue is not one of legality, but morality. Truth be told, if the Church was doing it’s job or had been doing it’s job then the issue wouldn’t be this big would it? I’m reminded of the scripture where Jesus talks about the salt of the earth, “”You are the salt of the earth. But if the salt loses its saltiness, how can it be made salty again? It is no longer good for anything, except to be thrown out and trampled underfoot.” That is what has happened here, the Church has lost it’s saltiness, and is turning to an inherently evil institution to get it back. Well I’ve got news for you all, you cannot legislate morality. Making homosexual marriage illegal will not make homosexuality go away or somehow make homosexuality any less a sin.

We’ve established that in the area of legality, it is DOMA that is unconstitutional. (illegal, or in direct contradiction with the Constitution of the United States) It stands to reason that making homosexual marriage illegal will not deal with what evangelical Christian’s believe to be a problem, homosexuality. Whether or not the act of marrying is recognized by our government will not change their belief that a homosexual relationship is morally wrong, moreover a sin against God. Whether we call it a a civil union, a marriage, a domestic partnership, or anything else will not change that belief about homosexuality. Evangelical Christian’s are fighting, I believe, the wrong battle. Why are they (we) contending with the legality of the situation and not the morality? We agree that whether it is legal or not ( and I do believe it should be legal, in regards to federal law.) does not change whether it is moral or not. Secondly, if this fight is going to be a legal one, then make it a legal fight over the legality of the subject. I mean to say, fight it at the state level where it belongs. Do what the pro traditional marriage people did in California and leave the federal government out of it.

In a perfect world, marriage would be totally unregulated by the government; however, we do not live in a perfect world. Government is, as Thomas Paine put it, a necessary evil. (Which begs the question why one would want to mix something as holy as marriage with something as inherently evil as government.) As long as we have both marriage and government (and I foresee both sticking around for a while.) we will have to have the two mixed. Being that is the case, they should be mixed as little as possible. This means we should follow the Constitution and subject marriage to state laws and not federal ones. Let the people in each state decide for themselves what will be recognized as marriage and what will not be, and the federal government should respect the people’s decisions.

6 thoughts on “Joshua Fauver: An Analysis of the DOMA Decision”