Will Darrell Castle Seek The Constitution Party Nomination in 2016? 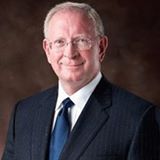 In 2012 Mr. Castle announced last second from the floor at the Constitution Party National Convention that he would be seeking their nomination and lost to former Virginia congressman Virgil Goode. That act raised a lot of eye brows at the time, but any commotion it may have stirred up seems to have been since laid to rest.

With a resume like his, it seems that Darrel Castle is poised to seek the party’s nomination. It is no secret that Darrell is a longtime upstanding member of the party and is very popular with the Constitution Party national committee as well as the party’s other members.

For a member of the party that is as involved as Castle is (V.P nominee from ’08, currently hosting two online radio show’s) it wouldn’t be out of the question for him to receive their 2016 presidential nomination. I’d wager that if Castle does seek their nomination in 2016, any outside contender (and there was a host of them in 2012) would have virtually no chance at defeating him.

Being that I’ve been following this story since it first broke in April (I was at the spring meeting where he announced his interest in seeking the party’s nomination.) I’d say the party may have already virtually anointed him their nominee. The following was posted on the Constitution Party’s Facebook page earlier this month:

“There is a growing movement to “Draft Darrell Castle for President 2016″. If you are interested in moving this forward, please like this page. We need to see 1000 likes before we start organizing the Boots on the Ground. Now is the time to start working towards re-establishing the American Constitutional Republic.”

It was followed by a link to a page that was created to draft Darrell Castle for President in 2016. (Said page can be found here )

Moving from the party politics side of this story and to the practicality of it, I do not for a second believe that this is speculation. I do believe that Mr. Castle will be seeking the party’s nomination in 2016. It isn’t simpily because I believe that he knows that there will not be an outside contender strong enough to beat him, but the following was posted on the aforementioned Facebook page dedicated to drafting Mr. Castle:

“SHARE “Draft Darrell Castle for President 2016″ with every CP supporter and start building a groundswell of support for his candidacy. 1000 likes and we start organizing Boots on the Ground!”

It was after posting that the page administrator, whoever that may be, commented to say:

“If you would like to be part of the DC in 2016 Team, please send a message to Darrell via this website page. Make sure you include your state. We need to see committed people in order to make this happen! http://www.castlereport.us/contact/”

Will Darrell Castle seek the Constitution Party nomination in 2016? I don’t think anyone can say for certain, aside from Mr. Castle that is, yes or no. One thing we do know for certain however is this; Mr. Castle is certainly thinking about it, and apparently thinking about it hard. All of the signs are pointing towards a Darrell Castle run for the party’s nomination and he appears to already have the blessing of the party. Should Castle seek the party’s nomination he is certainly a shoe in to get it.

2 thoughts on “Joshua Fauver: Will Darrell Castle Seek The Constitution Party Nomination in 2016?”