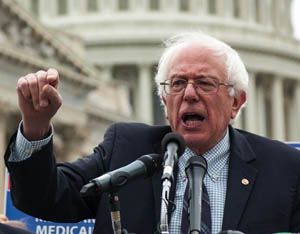 At a Capitol rally: progressive U.S. Senator Bernie Sanders, whom Socialist Alternative is urging to run for president. Courtesy photo

In the November 2014 election season, voter participation hit a record low. This is more than just a mid-term slump. Voters are increasingly alienated from the two major parties. Only slightly more than a third of eligible voters participated nationally. And of the minority who are registered, a record 42 percent ditched the Democrats and Republicans to identify as independents. Clearly, more and more people are fed up with the status quo of ever falling wages and reduced social benefits. So, socialist groups should be poised to attract many who are looking for an alternative.

But how should socialists participate in elections? Despite the recent Seattle City Council win of open socialist Kshama Sawant, many groups (including Sawant’s own) think their best bet is to join with almost any liberal third party whenever possible — at the expense of their own message.

The Hawkins/Jones campaign. In New York State, Socialist Party’s Howie Hawkins and International Socialist Organization’s (ISO) Brian Jones teamed up to run for Governor and Lieutenant Governor on the Green Party ticket. Even though the platform was filled with socialist-inspired solutions, it was scrubbed free of an anti-capitalist analysis of the system. What resulted was a fundamentally flawed campaign.

For example, when Hawkins participated in a televised debate against Democrat Andrew Cuomo, he called himself a “progressive,” and spent his airtime on platform issues like education and fracking. But he left out the big picture of how the über rich run New York State. He didn’t call out Cuomo for his neo-liberal program of tax cuts for the rich and wage freezes for workers.

As Jones wrote in the journal Jacobin after the election, “Hawkins and I are both socialists, but this campaign didn’t emphasize the distinct contributions of socialism and socialist ideas. Instead it put forward, broadly speaking, an independent working-class agenda for reform.” What Jones and Hawkins don’t get is that there’s no such thing as an independent working-class agenda unless it clearly identifies the enemy of working people — capitalism.

What is wrong with the Democrats and Republicans is not fundamentally found in their platforms. The Democrats routinely ignore their progressive platform planks as soon as they are in office. The underlying problem is that both parties represent the interests of big business; The Republicans by arguing that what’s good for multinational corporations is good for everyone, and the Democrats bypretending to offer an alternative that is pro-labor, pro-environment, pro-women — fill in the blank — while actually delivering whatever big business wants.

Any third party that doesn’t make clear that the interests of workers are diametrically opposed to those of big business, is simply part of the problem. Without this guiding principle, if a third party ever wins at the ballot box, it instantly moves to sell out its program.

Hawkins’ soft-peddling of socialism was mandatory. To get with the Greens, you have to stick to their program, which is explicitly not anti-capitalist. This orientation showed in the Greens’ attempt to unite with the Working Families Party (WFP), which identifies as pro-labor. But WFP rebuffed them because it primarily endorses Democrats. It claims to stick to pro-labor candidates, but made a mockery of that assertion by endorsing Cuomo!

Both the Greens and WFP are reformists. They preach the gospel that capitalism can be reformed — against consistent evidence to the contrary. By running as Greens, Hawkins and Jones failed to offer the only real solution to ruling class politics as usual.

Bernie Sanders — not independent of the profit system. Socialist Alternative (SA) is pushing Bernie Sanders to run for President in 2016. Sanders is a long time senator from Vermont and an independent who identifies as a “democratic socialist.” At a forum on climate change in New York City in September 2014, Sawant (an SA leader) devoted much of her speech to pressing Sanders, who was the chair, to run.

Sanders replied that he’s not interested in an “educational campaign … where you only win 2 percent of the vote.” The National Journal clarified in November that Sanders is actually angling to be drafted to run under the Democrat banner. This is entirely consistent with his longtime cozy relationship with the party establishment.

He may make refreshing anti-Wall Street speeches, but his voting record speaks to his dedication to the pro-war status quo. He joined the 9-11 rush to back the war in Afghanistan, and while he voted against the invasion of Iraq that followed, he has voted repeatedly for war funding and military budgets. He supports Israel’s murderous bombings of Palestinians in Gaza. He is squarely on the side of the military profiteers on foreign policy.

Socialist Alternative’s eagerness to align with Sanders despite a track record that crosses class lines is nothing new. SA has a history of supporting Green and independent pro-capitalist candidates. All they ask is that the aspirant not be a Democrat — and not belong to another socialist group. This stance pits it against effectively promoting systemic change.

Past time for a socialist electoral alliance. Gallup polls show growing support for socialism, with 39 percent favoring it. This disenchantment with capitalism means there is huge potential to capture the interest of working-class Americans with an out and proud socialist campaign.

The way to build support for socialism at the polls is to create a clear socialist electoral alliance — where socialist parties and independents run candidates on a principled, anti-capitalist program. If groups like ISO and SA rose above their competitiveness to collaborate with other socialists, as the Freedom Socialist Party has advocated for years, a powerful coalition could be built that could get on the ballot and also mobilize people for protests, strikes and other drives.

Such a coalition could explain that socialism is the only way to deliver shared abundance and solve the social problems that the super rich ignore. It could be the first step to creating a real party of the 99 percent that not only criticizes capitalism, but contends to replace it — that not only speaks truth to power, but prepares to take it.

18 thoughts on “Freedom Socialist Party: Should Socialists Align with Greens and Liberals?”