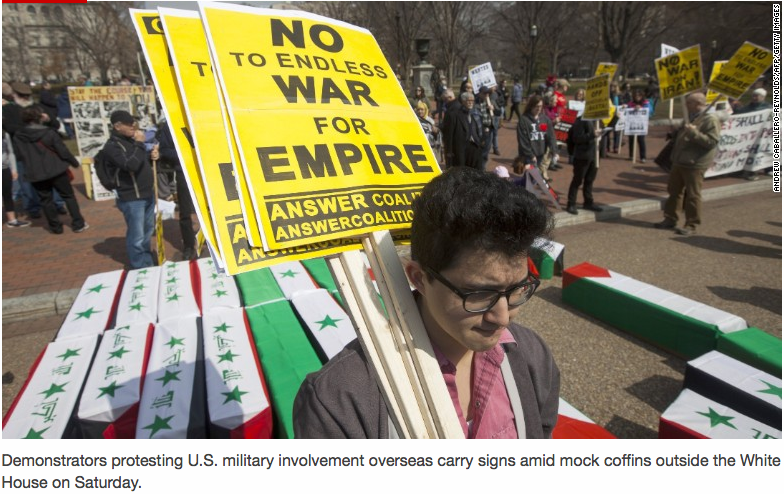 The Tax Wall Street Party representative to the DC Spring Rising and anti-war rallies in front of the White House reports that the events were dominated by the typical liberal foundation funded CIA assets organizations. Code Pink controlled the congressional lobbying on Thursday, March 19. World Can’t Wait dominated the “teach-ins” on Friday, March 20. The Answer Coalition took charge of the White House rally led by Eugene Puryear on March 21. With the exception of speakers from groups such as black agenda, RCP and Answer Coalition there was no analysis as to the origins of world conflicts since the beginning of the 21st century. The CIA role in the creation of jihadist death squads was not discussed at any length, and except for the Tax Wall Street Party representative’s two minute tirade against Jeremy’s Scahill, Amy Goodman and Hillary Clinton, the role of the pro-war left the rise of ISIS and regime change death squads was totally absent.

The subject of Ukraine was touched on by Ray McGovern in a two-hour panel on Friday the 21st but was notably absent from any Code Pink or Answer Coalition rally on Saturday. Perhaps the best event was led by the Answer Coalition rally at the White House where green Syrian and green Libyan flags were present draped over long boxes representing coffins of the civilian deaths in those countries by NATO imperialists.

However this White House rally was intended by not more than about 300 to 400 people. While in DC, the Tax Wall Street party representative made contact with an anchor of RT and a friend from New York city who also works with RT. Other items worth mentioning was the Tax Wall Street Party representative’s trip to New York City’s East Village and the ensuing discussion with Deb Lee, Eric Rossi, Tom Kiley, and guest Glad Atzmon. A full report is in preparation once audio and video files of the event are available.