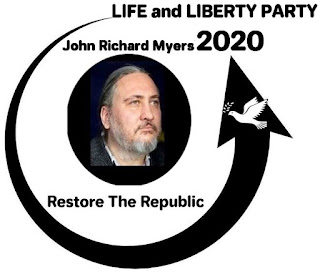 J.R.Myers, Chairman of the newly formed Life & Liberty Party, has announced his intentions to run for President of the United States in 2020. J.R. had sought the Constitution Party POTUS nomination in 2016. He appeared on the California American Independent Party primary ballot, winning three counties.… Read more ...

END_OF_DOCUMENT_TOKEN_TO_BE_REPLACED

Though most of the media attention of the June 7 California primary focused on the Democratic and Republican races, with Hillary Clinton and Donald Trump winning each, respectively, the Peace and Freedom Party, the Green Party, the Libertarian Party, and the American Independent Party (AIP) all held primaries as well, owing to the fact that each has attained the status of political party in the state; a designation reserved for parties that can show they have registered members totaling greater than 0.33% of registered voters in the state, and maintained with either keeping registered voters at that percentage or holding 0.067% of registered voters while winning at least two percent of the vote in a statewide election.… Read more ...

END_OF_DOCUMENT_TOKEN_TO_BE_REPLACED

Tuesday 4-30-13
Re : The ” Clarion Call to Unite Committee ” ( CCTUC )
Dear State Chairmen and all Constitution Party supporters and members -I write this hopefully short letter to you with the knowledge that you, as I, have a tremendously busy schedule but I feel that the issue which I shall discuss needs to be brought to your attention and consideration relevant to both current and, especially, future developments within the party.As

END_OF_DOCUMENT_TOKEN_TO_BE_REPLACED

The American Independent Party of California, the largest single-state third party in the nation by registration has submitted to the California Secretary of State a list of candidates for its presidential preference primary, which is non-binding. Amongst the names is the husband of former Republican nominee for Vice President in 2008, Sarah Palin.… Read more ...