The Freedom Socialist Party denounces Donald Trump’s Feb. 21 outrageous, inhumane deportation orders, commits itself to defend immigrants of whatever status in every way possible, and urges others to do the same.

Trump directed these orders to be enforced against any and all of the estimated 11 million undocumented immigrants that federal agents or local authorities round up or merely encounter.… Read more ...

END_OF_DOCUMENT_TOKEN_TO_BE_REPLACED

Mumia Abu-Jamal needs life saving treatment for Hepatitis C. And we need your help to get it.

Although political prisoner Mumia Abu-Jamal is free of his death sentence, he still suffers under life in prison without parole.… Read more ...

END_OF_DOCUMENT_TOKEN_TO_BE_REPLACED

An impassioned pioneer tradeswoman, champion of affirmative action, and decades-long feminist and union activist with the International Brotherhood of Electrical Workers, Heidi left an indelible mark on the Seattle scene.… Read more ...

END_OF_DOCUMENT_TOKEN_TO_BE_REPLACED

Freedom Socialist Party: Why We Confront the KKK 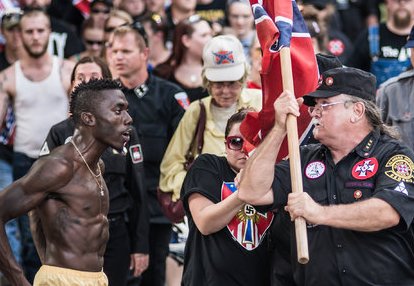 South Carolina was once a thriving center of the Southern slavocracy. No wonder that today it is a lightning rod for the unfinished battle against racism in the USA. In the last period, a white Charleston cop was indicted for murdering Walter Scott — unarmed and Black.… Read more ...