BREAKING: Gary Johnson Will Not Be Included in Presidential Debates 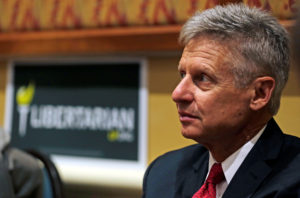 It has been announced by the Commission on Presidential Debates (CPD) that Hillary Clinton, Donald Trump and their running mates are the only candidates who will participate in the first debates, excluding Libertarian presidential candidate Gary Johnson and Green party candidate Jill Stein.… Read more ...