Ken Moellman is the chairman of the Libertarian Party of Kentucky (LPKY). He was a candidate for Kentucky state treasurer in 2011, a race in which he came in third place with 37,261 votes, or 4.6% of the vote. 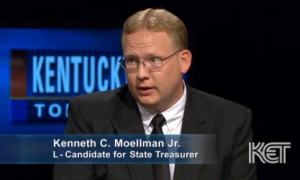 I often hear people lament that Libertarians split the vote and cause their candidate to lose.… Read more ...

END_OF_DOCUMENT_TOKEN_TO_BE_REPLACED

The latest from The Ledger:

“Hi, this is Newt Gingrich…Florida Democrats have created a fake Tea political party to split our conservative vote and keep (House Speaker) Nancy Pelosi in power.

“The liberals’ fake Tea Party candidate for your district is Randy Wilkinson.

END_OF_DOCUMENT_TOKEN_TO_BE_REPLACED

The Eternal Debate on Debates

From the Topeka Capital-Journal:

It is more than philosophical. It is personal.

Gray is the Libertarian Party’s nominee for governor, while Cannon carries the banner of the Reform Party on the November ballot.