In the early 20th century, the development of mass communications propaganda enhanced the ability of governments to secure public support for waging war. In America, WWI was “sold” to the public by a carefully planned public relations campaign directed by early pioneers of opinion manipulation, such as Edward Bernays. In 1928 Bernays published a definitive book, “Propaganda,” on the new science of influencing the public. In this book, he declares the purpose of this science bluntly:

The conscious and intelligent manipulation of the organized habits and opinions of the masses is an important element in democratic society. Those who manipulate this unseen mechanism of society constitute an invisible government which is the true ruling power of our country. We are governed, our minds are molded, our tastes formed, and our ideas suggested, largely by men we have never heard of…. It is they who pull the wires that control the public mind.

Soon thereafter European dictators, like Hitler and Mussolini, used the tools of propaganda to rise to power and launch a terrible war. What the early students of propaganda did not foresee was that a time would come when the mechanisms of propaganda would no longer be subservient to the national objectives of powerful leaders but would become a dominant influence on the conduct of nations. This inversion of policy and propaganda is a fundamental reason why America’s “War on Terror” has become detached from rational policy objectives and serves as a kind of theater of cruelty for the amusement of the public, much like the bloody spectacles of the ancient Roman arena. In short, propaganda, which was invented as a tool to serve powerful leaders now dictates the actions of the leaders. Americans have become trapped in a world in which the propaganda of inciting irrational fear and hostility has become self-perpetuating, leading to an endless public spectacle called a war.

The German military theorist Clausewitz called war “a continuation of politics with the admixture of other means.” By this he meant that after exhausting the resources of diplomacy nations may turn to war, but war should serve a nation’s interests. Today’s American War on Terror defies logical connection to any sound national interests. America’s invasions of Afghanistan and Iraq are widely considered disastrous failures, and our military interventions in Libya, Syria and several other troubled nations have spread chaos and anarchy. These military adventures do, however, entertain the public. The evidence for this entertainment mechanism is the repeating patterns of the propaganda spectacles that are presented. Here are some examples: 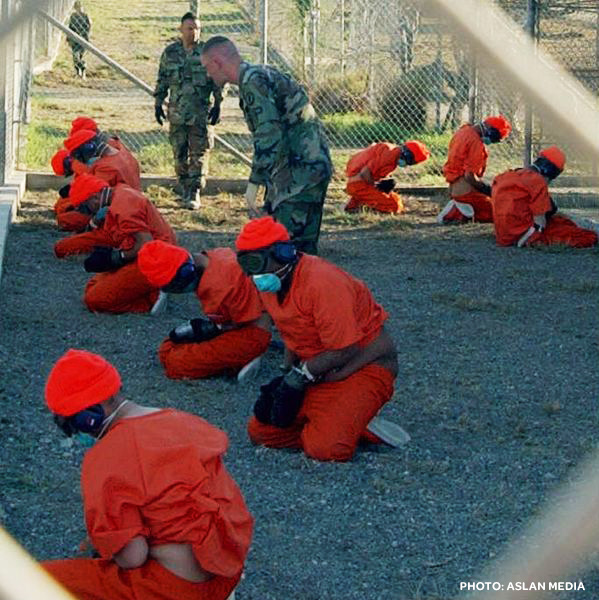 In ancient Rome the parading of defeated captives was a part of the marches of triumph that celebrated victorious military campaigns. The triumphal procession would include caged or shackled captives, whose humiliation excited and pleased the Roman crowds. The US imprisoned suspected terrorists at Guantanamo, a military base in Cuba, presumed to be outside the legal jurisdiction of US Courts. Pictures of the shackled kneeling prisoners were widely publicized, as were descriptions of the harsh conditions of confinement and interrogation at Guantanamo. This pleased a public hungry for revenge after the shock of the 9/11 attacks. The crucial distinction between the practice of the Romans and the US in the display of captives is that the Romans did so after securing strategic triumphs like the conquest of Gaul. There has been no equivalent triumph in the open-ended US global War on Terror. It is widely believed that the abuse of prisoners at Guantanamo and other sites has helped recruit Islamist militants worldwide. Even as a legal stratagem for punishing accused terrorists, Guantanamo has been a failure, since the maltreatment of the prisoners renders their prosecution untenable, leaving many of these prisoners in a legal limbo, possibly for the remainder of their lives.

Although President Obama campaigned on a promise to close the Guantanamo prison, he was unable to persuade Congress to do this. I believe the only credible explanation for this recalcitrance was the desire to maintain the public propaganda benefit of ritual humiliation of (suspected) terrorists: propaganda driving irrational policy.

A U.S. aircraft dropped a GBU-43 Massive Ordnance Air Blast bomb, also known as a MOAB or ‘mother of all bombs’, on an area in the Achin district of Nangarhar province, Afghanistan, on April 13, 2017. The MOAB is a ten-ton bomb, the largest conventional weapon in the US arsenal. The dropping of this bomb had no effect whatever on the strategic situation of the US military intervention in Afghanistan, now in its 19th year. America lacks the military resources to fully suppress the Taliban insurgency in Afghanistan which controls about two-thirds of the population and continues to inflict defeats on the US-backed Afghan government. The bomb did have significant propaganda value, however, because the images and videos of the effects of this weapon were widely reported.

The great danger of reliance on super weapon propaganda is that leaders may come to believe it. The use of super weapons to bolster public morale in a losing war was notable in WWII Germany. The German V1 cruise missile and V2 ballistic missile were revolutionary pilotless bombs that Hitler mistakenly believed would win the war. President Trump has boasted that he could win the war in Afghanistan by killing millions of Afghans, presumably with indiscriminate use of advanced American weaponry. Our super-weapons pose a greater threat to us than to our enemies: propaganda driving irrational policy.

In Orwell’s prescient dystopian novel, “1984,” a key tool of state propaganda is focusing public rage on an archvillain who is responsible for all the evils of the nation’s enemy. In the novel, there is a daily assembly in which members of the public witness a video depiction of Emmanuel Goldstein, the leader of the enemy state. For two minutes, the audience is whipped into a frenzy of hatred that sustains their war fervor. In America’s War on Terror, a succession of supervillains has served a powerful propaganda purpose: Bin-Laden, Al-Baghdadi, and most recently Soleimani have been killed to symbolically defeat an ill-defined adversary power (terrorism). Yet the endless war continues.

From a strategic perspective, the killings of Bin-Laden and Al-Baghdadi, founders of Al Qaeda and ISIS, were irrelevant because these leaders had fled into hiding and no longer commanded significant forces. Killing Soleimani, the Iranian general aiding anti-American forces in the Mideast, was a strategic disaster because it brought the US and Iran to the brink of a full-scale war and persuaded the Iraqi parliament to request the departure of the remaining US troops in Iraq. Nonetheless, Trump is milking the propaganda value of the Soleimani assassination at political rallies, irrespective of the negative consequences for the US position in the Mideast: propaganda driving irrational policy.

The failures of US foreign policy in the global War on Terror have become so conspicuous that there is growing organized criticism of this reign of misrule. Recently the Quincy Institute for Responsible Statecraft was formed by support from wealthy activists from opposite ends of the political spectrum (Charles Koch and George Soros). The first paragraph of the institute’s charter addresses the problem succinctly:

The foreign policy of the United States has become detached from any defensible conception of U.S. interests and from a decent respect for the rights and dignity of humankind. Political leaders have increasingly deployed the military in a costly, counterproductive, and indiscriminate manner, normalizing war and treating armed dominance as an end in itself.

I assert that a main reason why military conflict has become an end in itself is that the propaganda associated with the War on Terror is out of control and is now dictating irrational and counterproductive actions. War propaganda, once a servant of American politicians, has now become a master. Taming this monstrous former servant will be a crucial challenge for American democracy.