“Someone needed to stand with the disability rights community and I did,” said C. T. Weber, Peace and Freedom Party State Chair and nominee for Lieutenant Governor. Weber was arrested at a rally on Disability Rights Day at the state capitol on Wednesday, August 18. The disability community was protesting the crippling cuts to social services in the state budget.

Twenty-two demonstrators, eight of them in wheel chairs, were arrested after they sat down and blocked traffic. However, the police vans had no ramps to take those in wheel chairs away. C.T. Weber received a head wound when a channel 3 TV camera hit him. All but one of those arrested were issued citations and released.

This is not the first time that Weber has been arrested for civil disobedience. Recently he was arrested in Congress member Doris Matsui’s district office for protesting her votes for funding the occupations in Iraq and Afghanistan.

On July 31 Cindy Sheehan changed her voter registration to the Peace and Freedom Party. She is the mother Spc. Casey Sheehan who was killed in Iraq on April 4, 2004. She is the national director of Peace of the Action, the author of five books and host of her own radio show, Cindy Sheehan’s Soapbox. 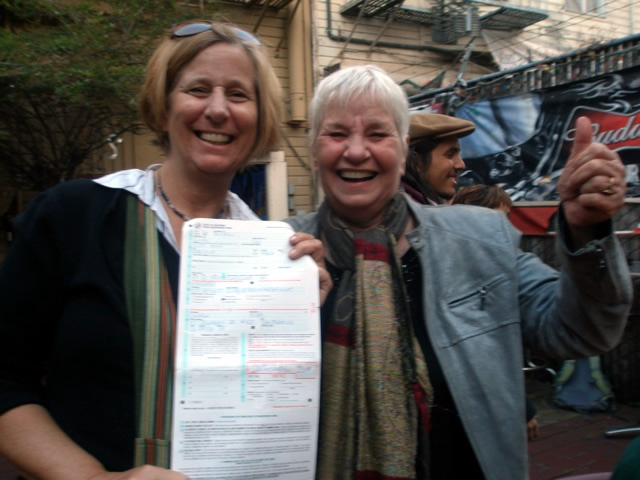 Cindy Sheehan holds up her new voter registration form. With her in the photo is San Francisco County Central Committee member Nancy Keiler.