Running for public office without the backing of a major political party can be difficult.  Not only must candidates negotiate strict ballot access requirements, low name recognition, and dismal fundraising, there are additional hurdles in today’s technologically advanced society.  As the following candidates demonstrate, independent & third party candidates must now deal with lustful Facebook followers, voyeuristic FBI agents, and even attacks from . . . leaf blowers?  See below for details on the latest burdens facing the independent and third party candidates of today.

Mosheh Thezion is a very serious man concerned about the future of his nation.  Like former New Mexico governor Gary Johnson, he initially ran for president in 2012 as a Republican, and after not gaining traction, sought the Libertarian Party’s presidential nomination.  Thezion is now exploring a presidential bid in 2016 based on five points he believes will help restore constitutional law in the US.  On these points, Thezion claims to have the backing of 1000 other candidates. The group’s Facebook page has 84 members. Thezion maintains even more supporters on his personal Facebook page.

Unfortunately, Thezion’s attractive Facebook portrait shown above, has become a political liability.  This past December, the image allured a Facebook friend, who, in Spanish, expressed his lustful desires for Thezion.

Keniston noted that he did not understand Spanish, so Rodriguez explained, “I say yes man he has nice picture.”

Agreeing, Keniston added, “He looks like a serious businessman.”

A little bit later, Thezion discovered the exchange and commented: “Vidal did not say I look nice . . . he said he wants to do things to my ass . . . and I am not pleased that this conversation exists . . . it will be a magnet for people to insult me. I personally do not like the photo, I need to make a new one.”

Hoping to console Thezion, another friend proposed, “If you’re not into men, I’m female and willing to fuck your ass. I hope this may clear any negative attention the previous comments may bring.”

“Longstanding, well known Progressive activist” Robert Milnes has had his share of trouble with the FBI.  In the 1980s, he was arrested and pleaded guilty to stalking and threatening a TV news reporter, an event Milnes claims was a covert FBI operation.  Following his release, Milnes ran for president in every election cycle since 2004, having his best showing in 2008 when he received 721 votes (4.28 percent) in the California Libertarian Primary.  However, his run-ins with the FBI have not ceased.  In 2011, as reported on his 2012 campaign website, Milnes discovered that the FBI was employing MSNBC reporter Norah O’Donnell to watch him through his television set as he masturbated to her .

Milnes offered little proof for his theory, outside of the “Freudian slips, body language, and acculturation” he observed in O’Donnell while he masturbated to her news broadcast.  But, in recent weeks new evidence has come forward.

On The PLAS Place, a news blog created by Milnes which doubles as his 2016 campaign website, at least three strange occurrences have taken place,  First, a photo of Chairman Mao was added to a post about Israel’s sabotage of leftists and libertarians. Second, on a page discussing the initial attack on The PLAS Place, a banner for fellow 2016 Libertarian presidential candidate Kip Lee mysteriously appeared.  Third, after removal of the Kip Lee banner, a (since removed) photo of supermodel Kate Upton emerging from a pool in a white transparent t-shirt found its way onto the page. 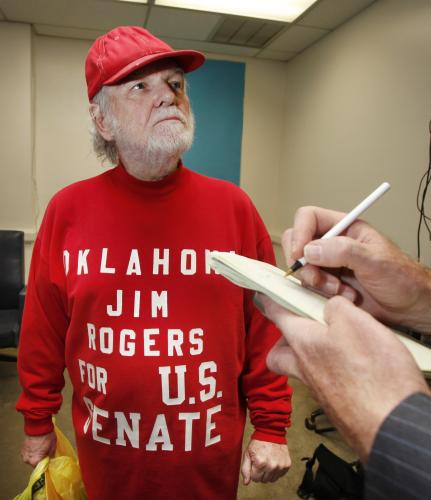 Among his many campaigns, the colorful Jim Rogers of Oklahoma ran as an independent presidential candidate in the 2008 election cycle.  In 2007, Rogers sent the following letter to the FEC pertaining to this run (grammar and spelling corrected from the original):

I am running for President of the USA and will file in Oklahoma City at the state capitol there Monday early around eight am, Dec. 3, [2007].

I have encountered a problem which I need to make you aware of now.

On November 8, I went to the Midwest West City Post office
Midwest City, OK and returned from there after mailing my Items to my own personal mall box on the grounds of the apartment complex where I live . . .There [at the apartment complex] were three men, two with leaf blowers working about thirty feet away as I came up the walkway to the Post office box that is mine.  As I got my key and opened the box, I was sprayed with dust, grit, tiny rocks, leaves & debris.  One of the men with a leaf blower came up on one side of me, and the other on the other side with his leaf blower operating. and sprayed me from both sides including my face, eyes, etc.

I could understand this being an accident if one person had been Involved but to have allowed [this] with a supervisor present who was supposed to watch them, I find it unlikely this was an accident.  A person running for office can get few votes if he is blind.

I contacted the Midwest City Department and they said as far as they could determine it was an accident, hence they do not plan to do anything about it, and I cannot find out the names of the people involved or the company they worked for. This Is described in the copy of Information and report sent to the Midwest Public Dept and to the Attorney General of Oklahoma,  The latter has not replied to my letter yet.

I am enclosing copies of the photos of truck involved used by the three men and appeared to be their company truck, and I was told they worked for a contractor whose name they would not say to me. So if it was an accident why all the secrecy in the matter?  However if I was attacked because of my political activity that is a completely other matter.  I am of the opinion I need some protection from the FBI, the Secret Service, or other agency like the Marshall’s service of the US initially in this matter and for protection until I am better recognized and publicized as a candidate. . . .

Possibly a result of the attack, Rogers’ 2008 presidential campaign showing was less than stellar.  However, he later found success in the Democratic Party. He won the party’s 2010 Senate nomination in Oklahoma (losing in the general election to Republican Senator Tom Coburn), and qualified for delegates to the Democratic National Convention with a strong third place showing in the 2012 Oklahoma Presidential Primary.   Nevertheless, the party refused to recognize Rogers’ success.  There is no word on whether he plans to run again.