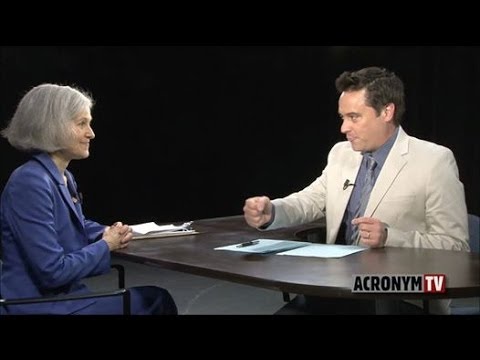 Acronym TV, which had been on hiatus, is officially shutting down production.

I have been offered, and have proudly accepted, the job of Communications Director for Jill Stein for President.

More on that in a moment.

First I need to say thank you- it has been an amazing ride and none of it would have been possible without the amazing crowd-sourcing of support you have showered upon me.

It is not many people who are lucky enough to find a supportive audience for their work – and for these past many years, I have been blown away by the support you have shown me.

In addition to all those who donated and shared the work on social media, I need to extend a very special thank you to Margaret Flowers and Kevin Zeese. As prime movers behind Popular Resistance, Margaret and Kevin were able to extend partial underwriting to Acronym TV for all of 2013 and much of 2014.

It was Margaret and Kevin who trusted me to serve as one of the core organizers in the pre-Occupy movement lead up to the occupation of Freedom Plaza. Their trust in me- a guy with a camera that they did not know from Adam- & just wanted to make some videos for the movement –opened the door for many opportunities and experiences that are among some of my proudest moments as a human being.

As I shut the door on Acronym TV- I can say I’m proud of where I was able to take the project and humbled that you helped me do it.

Pretty cool, considering it all started with a viral video a few years ago as the part ranting/ part performance art stylings of the The Hermit with Davis Fleetwood (anyone remember that?) – made in my basement with a $200 camera, a few $15 clip lights, and a nom de plume.

I paid myself, and the expenses of producing Acronym TV, through a generous loan extended by a longtime supporter – and through donations from people like you.

In spite of the debt, I have no regrets- only gratitude.

So what is next for me?

After spending the first few months of this year working on freelance projects and trying to strike a deal that would allow me to continue producing Acronym TV at the same high standards we set in 2014 – an unexpected thing happened: I was offered, and have proudly accepted, the job of Communications Director for Jill Stein for President.

In closing down this chapter of my career, I enter into a wild new adventure that presents the opportunity to do meaningful work around ideas that I am passionate about.

Jill won me over with her commitment to make the campaign about bringing the struggles of front-line communities into the front lines of Presidential debate.

It will be my job to help craft and deliver that message, and I hope to have your support while doing so.

Keep standing for something.

With great appreciation and thanks,