It is important to realize we have had two parties of the millionaires governing the United States since its founding. People have always had to pick between which of the millionaire parties we should choose from when neither put the people’s interests first. Some people have found a successful third way that builds people’s power.

Those in the Green Party view popular movements and third-party candidates (who cannot win elections in this rigged system) working together to change the direction of the country. We would rather vote for what we want and not get it in an election but use our vote to build a national consensus for the changes we need. That is a better alternative than voting for what we do not want, i.e. “a certifiable, lying, murdering war criminal” and a racist mass incarcerator, and getting it.

This emphasis on popular movements is the key difference between those building eco-socialist alternative parties like the Green Party, and those who actively or tacitly support the Democrat Party which deliberately deactivates mass movements such as Obama quashing the black players’ wildcat strikes or the DNC twice, suppressing at all cost the Sanders campaigns and the vibrant mass of youth and people of color which built a movement around them to lift Sanders’ democratic socialist platform in 2016 and 2020.

Socialists understand that movements of the people are what change the conditions of our class. Those who remain shackled election after election to the corporate parties do not have faith in ordinary people, instead relying on corporate politicians to change the conditions that keep 99% of the world’s population down, with most unable to thrive and lacking in their basic needs.

Relying on capitalists in capitalist parties who preserve the needs of capitalism and corporate profit to make the fundamental changes needed to have an equitable and just and non-racist society is what spoils elections, and spoils our chances for a better world.

The history of ending slavery, ending child labor, winning the 8-hour workday and union rights, breaking up monopolies (trust-busting), women’s voting rights, ending alcohol prohibition and winning the New Deal – came from the platforms of the Socialist and Progressive parties and were won through social movements.

In this century, it was Ralph Nader who ran on single payer, Medicare for All, and Jill Stein who ran on the Green New Deal (after Howie Hawkins first did so at the state-level in 2010). Every Green candidate has called for raising the minimum wage and taxing the wealthy.

This year we are facing multiple crises and the bi-partisan failed state of the two millionaire parties is handing none of them well: the pandemic, the economic collapse, racist police violence, and climate chaos, as well as the long-simmering deadly crises of inequality, inadequate healthcare, and a renewed nuclear arms race. Only one presidential ticket is right on ALL of these issues and that is Howie Hawkins and Angela Walker.

Voting for Biden is immoral in the current electoral reality. Trump is the worst president in our lifetimes and has to be removed from office.  Unfortunately, U.S. presidential elections are determined by the Electoral College so battleground or swing states are the key to winning. Because the presidential ​voting system assigns each state a number of electoral college votes, which​ go to the state’s victor regardless of the​ margin of victory, a handful of swing states will ​probably decide the election and are targeted heavily by the corporate parties, commonly ignoring voters in the remaining 38-42 other states. The swing states are comprised of mixed populations (urban, suburban, rural, etc.) and tend to flip between red and blue each election cycle. They include Arizona, Colorado, Florida, Georgia, Iowa, Maine, Michigan, North Carolina, Ohio, Pennsylvania, Texas, and Wisconsin.

Six battleground states that are close calls right now are interesting because they are all Republican states. The fact that these are now the only battleground states shows Trump is fighting off a landslide defeat — a well-deserved landslide. Swing states will not determine who wins, but whether there is an anti-Trump landslide.

The trends are not good for Trump. But no matter what happens with the polls, people who live in states like New York, California, Maryland, and the other 30 solidly Democratic states would be wasting their vote if they vote for Biden. A vote for Biden does not stand for Medicare for all, the Green New Deal, a public health approach to the pandemic, or ending the never-ending wars. Biden votes get lost in the corporate Democratic agenda of Joe Biden.

Republicans spoil elections by suppressing the Democratic vote and the Black vote. They orchestrate voter roll purges, most notably in the 2000 election in Florida, and restrict the number of polling places in Black and Brown communities. The GOP encourages voter intimidation at polling places.

Democrats spoil elections by trying to suppress the progressive Green vote, kicking us off the ballot instead of fighting in-between elections to replace the Electoral College with a national popular vote using ranked choice voting.

Both parties actively participate in gerrymandering which leads to more manipulation by monied interests, districts being drawn around racial lines and lower voter turnout because of the creation of safe seats where the real battle is over the nomination and not the election. Both partiesbenefit from voter suppression. Campaign financing is paid by billionaires and corporations in support of both major parties so that the super wealthy control our elections.

The GOP’s active suppression of the Black vote and the Electoral College’s anointing candidates who actually lost the popular vote spoils elections. Campaign financing and gerrymandering spoil elections. The election process in this country is a rotted mess that only benefits corporations, the wealthy and the corporate duopoly. Sadly, it’s a spoiled system whether the Green Party runs candidates or not.

Only voting for Howie Hawkins and Angela Walker makes sense in 2020 with two terrible candidates — the worst president of our lives and one of the worst corporate Democrats of our lives. We are not limited to those candidates.

Howie Hawkins is a retired Teamster construction and warehouse worker who has been active in movements for civil rights, peace, unions, and the environment since the 1960s. He was the first U.S. politician to campaign for a Green New Deal in 2010, in the first of three consecutive runs for New York governor. New York enacted several policies that only Hawkins had campaigned for after he received 5% of the vote in 2014, including a ban on fracking, a $15 minimum wage, and paid family leave. Vice-presidential candidate Angela Walker is a truck driver in Florence, South Carolina, a veteran and a union and racial justice activist.

We need to vote for candidates who represent and are part of the popular movements so we advance the causes of economic, racial and environmental justice. This is why I’m voting Green. 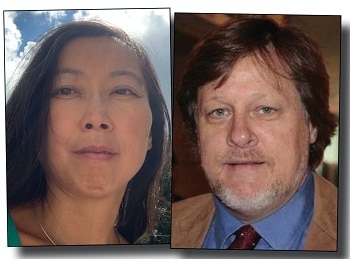 *Kevin and I worked on this article together right before his untimely passing on September 6. I met Kevin during Ralph Nader’s 2004 presidential campaign. Throughout the years since, I appreciated seeing his anti-imperialist and eco-socialist arguments strengthen and crystallize the longer I knew him. Kevin’s work is unfinished, and I intend to honor him by continuing the fight for a better world, one that is anti-capitalist, full of music, delicious food and laughter. Kevin Zeese, Presente. — Virginia Rodino