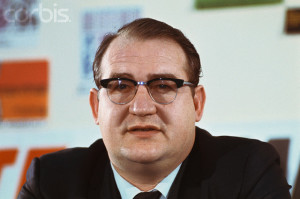 Fred W. Halstead, the Socialist Workers Party candidate for president in 1968, died of liver cancer at his home in Los Angeles on this day in 1988.  A longtime civil rights activist and prominent leader in the antiwar movement during the war in Vietnam, Halstead was 61 years old.

Halstead was born to radical parents in Los Angeles in 1927.  His mother, a Jewish immigrant, had been a Gene Debs Socialist and his father, Frank, a machinist of Irish descent, had been active in the IWW (Industrial Workers of the World).

Enlisting in the Navy, the younger Halstead served in the Asia-Pacific theatre during World War II and later studied at UCLA.  Unable to obtain seaman’s papers or a teaching position because of his membership in the militantly left-wing Socialist Workers Party, Halstead eventually found work as a cloth cutter in various Los Angeles garment shops, a trade he pursued until being stricken with cancer.

Deeply influenced by the “Bring the Boys Home” movement during his Navy tour, Halstead — a longtime staff writer for the party’s newspaper, The Militant — became one of the nation’s most effective antiwar leaders, vigorously opposing U.S. involvement in both Korea and Vietnam.

Halstead’s most important work arguably occurred during the Vietnam War when he played a leading role in the Fifth Avenue Peace Parade Committee, which organized major antiwar demonstrations in Washington, D.C. and New York City.  He also served on the steering committee of the New Mobilization Committee to End the War in Vietnam and was a member of the G.I. Civil Liberties Defense Committee.

During the war, Halstead spoke extensively throughout the country and later authored Out Now! — A Participant’s Account of the American Movement Against the Vietnam War, a 759-page book published a few years after the war ended.

Running on a platform that accused the Democratic and Republican parties of exploiting workers, fostering racism and pursuing imperialist policies while calling for an immediate withdrawal of all U.S. troops from Southeast Asia, Halstead was joined on the Socialist Workers Party ticket by Paul Boutelle (aka Kwame Somburu), a 33-year-old African-American activist who had cut his political teeth in the fledgling Freedom Now Party and Malcolm X’s short-lived Organization of Afro-American Unity.

Raising only $41,000 and competing against celebrity candidates such as comedian Dick Gregory and Eldridge Cleaver of the Black Panthers — both of whom were also running for the nation’s highest office on minor-party tickets — the media-neglected Halstead and his vice-presidential running mate were unable to take advantage of the leaderless antiwar movement that fall, a constituency that had briefly found refuge in Eugene McCarthy’s insurgent candidacy for the Democratic presidential nomination earlier that year.

Halstead traveled abroad extensively during the campaign, including making a visit to Vietnam in August.  Upon his return to the United States in September, the globetrotting Trotskyist told reporters that morale among U.S. troops abroad was ripe for major antiwar activity within the armed forces.

Earlier that summer, the Socialist Workers candidate also spoke out sharply against the Soviet invasion of Czechoslovakia, calling it a “a criminal and indefensible deed.”  Noting that the Czech regime was making strides toward “a genuine Socialist democracy,” the little-remembered Halstead said that any call for the removal of the Warsaw Pact from Czechoslovakia “must be coupled with an equally vigorous demand for U.S. troops to withdraw immediately from Vietnam.”

Appearing on the ballot in nineteen states that autumn, Halstead garnered 41,389 votes nationally.