Posted by Bruce Majors at The Insomniac Libertarian: 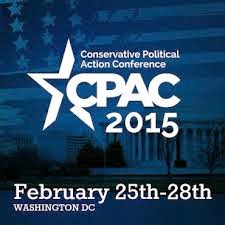 Your humble blogger started going to CPAC back in 2007 and have attended every CPAC since then.  Both in 2007 and in 2015 I ran booths in the exhibit hall, which limits or changes your perception of what went on at CPAC.

My first CPAC attendance was due to my participation in a local DC metro Ron Paul meetup.  Mitt Romney dropped out of the Republican primaries the day before CPAC, and the woman who had spent a huge amount of time organizing volunteers and supplies for his booth was very angry with him.  And Ron Paul was her second choice.  So she told us to take over the booth, which we did with less than 24 hours notice (Ron Paul had not secured one).  I showed up with the only thing I had, a small business card sized brochure I was distributing for Ron Paul door to door in Maryland, and an old reason magazine with Ron Paul on the cover as my only graphic for the wall behind me.  By then end of the day a full booth of volunteers had showed up and they had brought more than enough flyers, buttons, bumper stickers etc.  (A comely 22 year old man boy asked me for the copy of reason, and when I told him I had subscribed to it since I was younger than he, and that only a few years earlier it had been a mimeographed zine, he cocked his pretty head quizzically at the word “mimeograph.”) 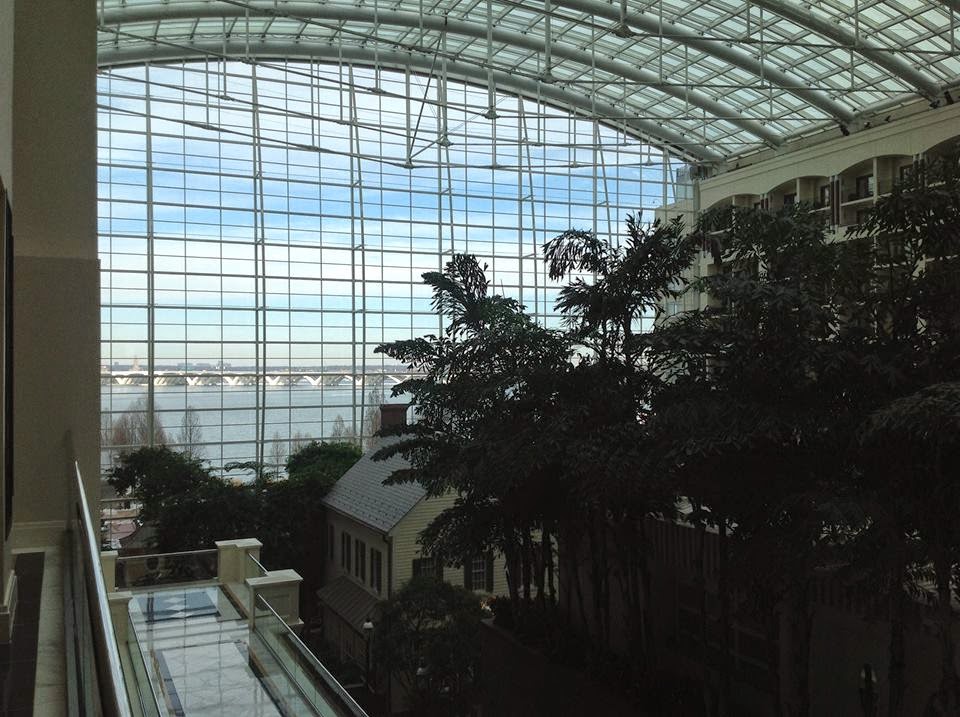 CPAC has now moved out of DC, to the Gaylord National Resort on the Potomac River in Oxon Hill, Maryland.  Back in 2008 we did not know Rand Paul would ever run for office, and Ron Paul traveled about the Wardman Marriott hotel (back in DC, where CPAC used to be) with an entourage of Governor Gary Johnson, Judge Andrew Napolitano and constitutional lawyer Bruce Fein.  This year there was a little friction between the Rand Paul and Gary Johnson peeps, as Johnson said Paul is not a libertarian and the Libertarian Party posted an anti-Rand graphic  (below). 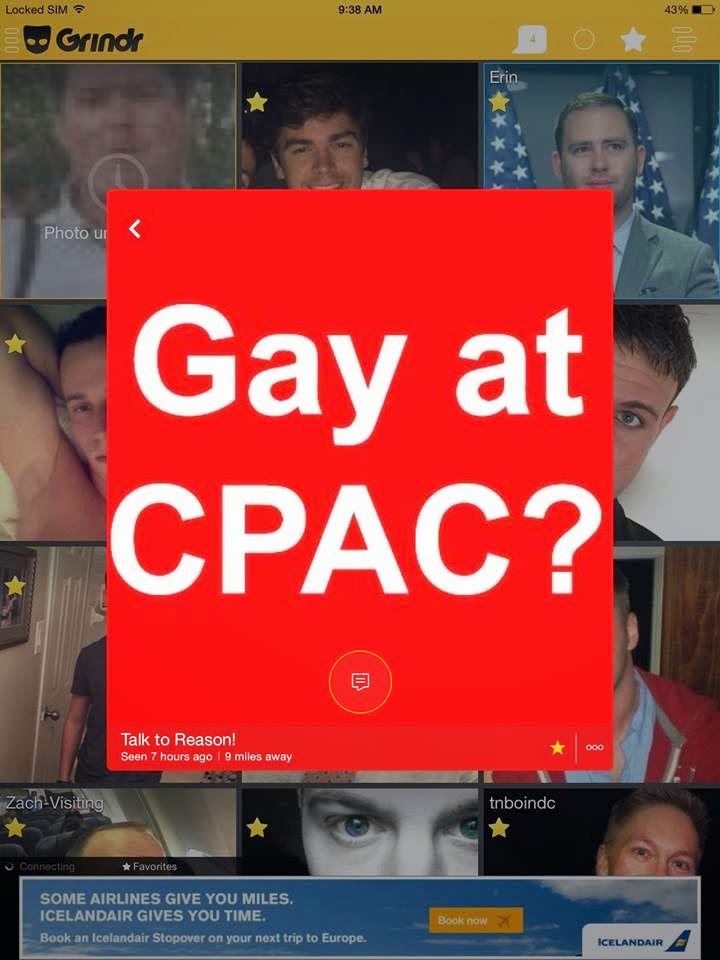 Since then I’ve covered CPAC – what the gays were up to, what Ann Coulter said, who won the straw poll, what the libertarians did – in my old tea party blog, which I actually started just to cover the divisions at CPAC.

This year I was in charge of staffing a booth for Gary Johnson’s Our America Initiative, so my experience of most of CPAC consisted of running the booth and watching the actual speeches on Fox and YouTube.  Though I did talk individually with hundreds of attendees and made it to four parties, those of the Republican Liberty Caucus, the Leadership Institute, the Competitive Enterprise Institute, and Rand Paul’s Young Americans for Liberty. 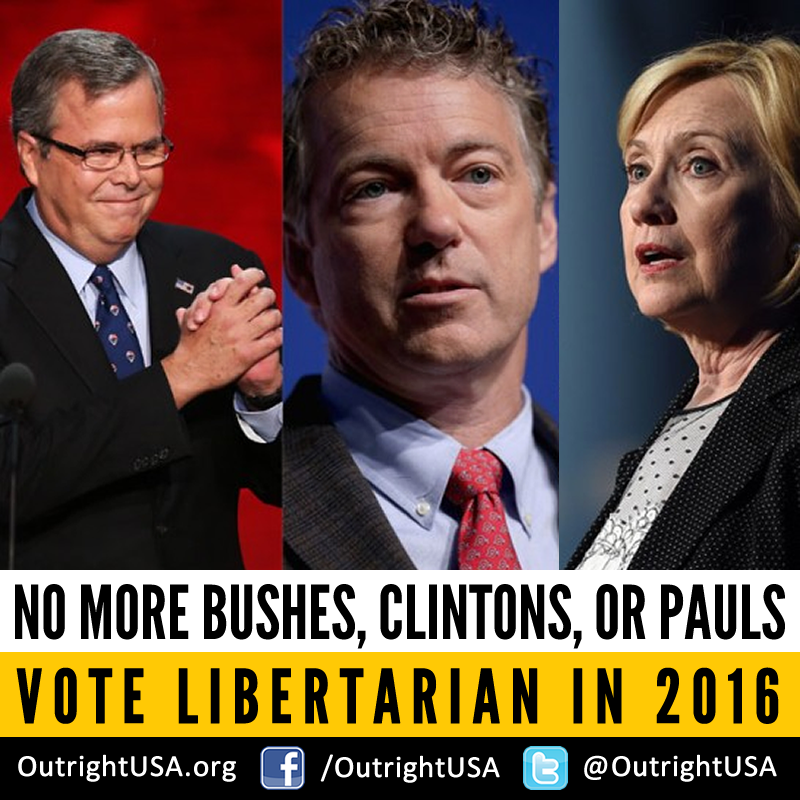 At the booth I got three types of common responses, people coming up to tell us they were libertarians (including young people who said they voted for Romney but since became libertarians and wish they had voted for Johnson), people critical of libertarians, and libertarians from Rand Paul’s booth coming over to give me static over the so very well timed  meme posted on the Libertarian Party facebook page (and produced by the gay group Outright Libertarians), comparing Rand Paul to Jeb Bush and Hillary Clinton.

No one had much interest in the particular items Our America had wanted us to push, about the law suit Gov. Johnson has against the presidential debate commission (I killed a tree for nothing), though LP News, Gary Johnson buttons, and libertarian bumper stickers were popular.  The Libertarian Party itself has not had a booth at CPAC since around 2008 (back when a not fully ripened Austin Petersen was a lowly intern in the Libertarian National Committee office.)

But there was other fun to be had.  reason magazine created a Grindr account to interview the gays, whose organizations (Log Cabin and GOProud) were forbidden from being sponsors, though American Atheists did sponsor CPAC, and Log Cabin director Gregory Angelo was on a panel on (gays in) Putin’s Russia. 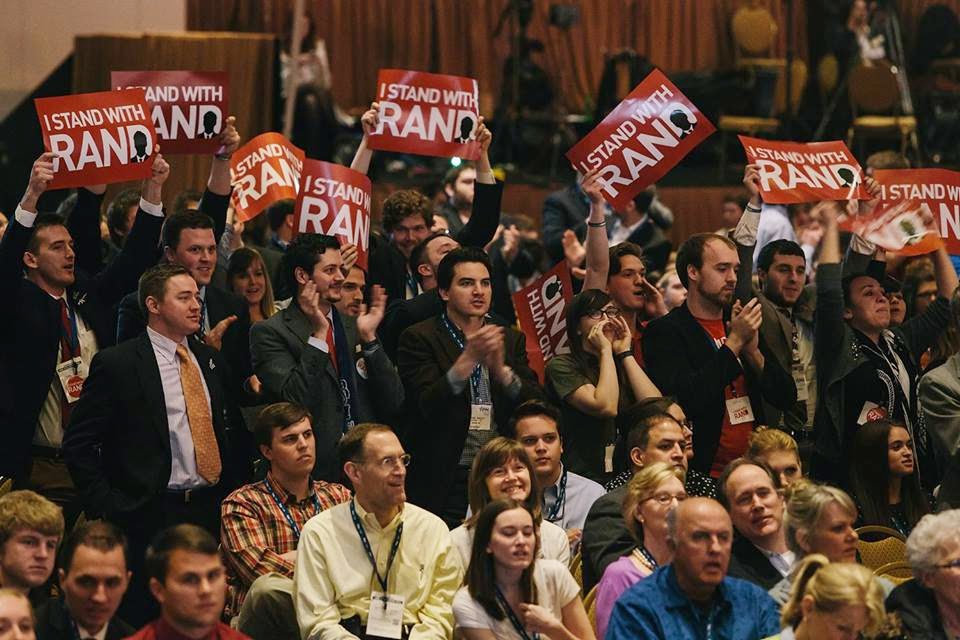 The coverage of CPAC by conservatives typically emphasizes how “unfair” and unrepresentative it is when Rand (or Ron) Paul win the straw poll, given that many of their voters have no money and crashed in cheap hotel rooms 4 and 6 to a room and paid only $25 for a student ticket, unlike the more representative Jeb Bush or Scott Walker voters, who are older and rented a $400 a night hotel room for 3 or 4 nights and bought a platinum level $800 CPAC ticket that gets them into fancy dinners.  (Sponsors who have booths also tip the voting in that booth volunteer passes are also voting credentials.  I am pretty sure the Our America Initiative booth created 6 votes for Rand Paul.)  There is a big age divide between Rand (or Ron) Paul fans and those of the other candidates, and the Rand people are willing to walk out, boo, etc. the other politicians