The Jo Jorgensen campaign for President sent out the following fundraising pitch yesterday.  It comments on the recent tweet from “Red Sweater Guy” Ken Bone, best known for his participation in the Town Hall debate between Donald Trump and Hillary Clinton during the 2016 presidential election.

You may remember Ken Bone from the 2016 debates.

He was the “red sweater guy” who was a famous undecided voter in 2016. He is trending on Twitter for a very good reason. 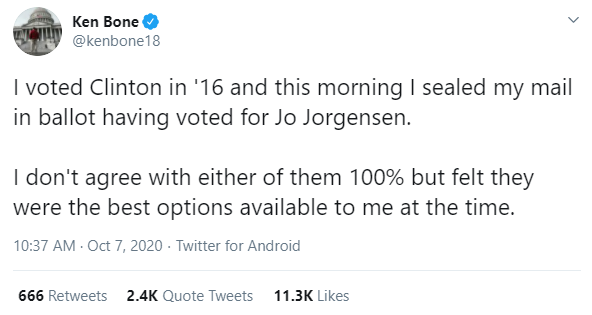 This proves what we always suspected…

Voters are getting tired of the lesser of two evils approach to elections. Americans want more choices. They want candidates who care about them and the issues facing our country.

Voters are sick of the media telling us who we ought to vote for. It’s time to break that system.

The pitch does not mention Bone’s “fetishist past” revealed in 2016 after his debate moment.