We have secured a location in the Tampa Bay area for our September 11th event.

The radical hand of Islam shows itself with violence against anyone who dares to stand up and speak the truth. We at Stand Up America Now will not back down. We will not be silent.

Abraham Lincoln said, “To sin by silence when they should protest makes cowards of men.”

On September 11th, 2013, to remember those who were murdered by radical Islam, and to send Islam a very clear warning, that they will not get their foothold in the American Constitution as they have done in Europe, we will be holding an International Burning of 2,998 Korans, representing one for each individual who was murdered in the September 11th, 2001 attacks.

President Obama is a aggressively working to convince the American public that civil rights laws are violated by those who make “inflammatory” statements about Islam.  However, peaceful speech and expression is fully within our civil rights.  Criticism of Islam cannot be avoided in light of its violent and oppressive nature. It is unjust that this scrutiny is to be considered “inflammatory” while the murderously inflammatory words of the Koran and the teachings of Islam’s leaders are protected by corrupt politics and politcal correctness.  We are on an extremely dangerous path as a nation!

Stand Up America Now, invites you to send Korans to: 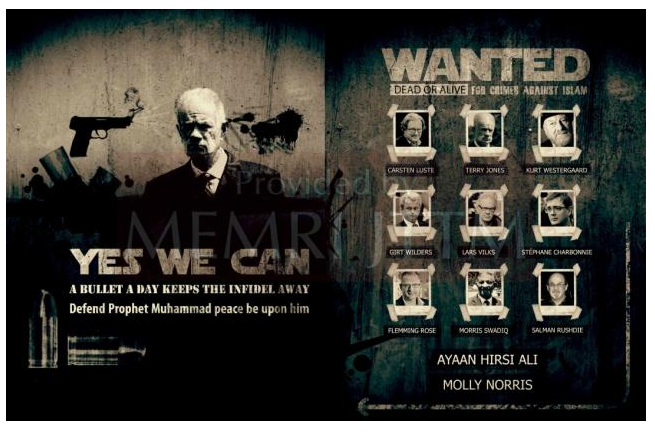 This poster was featured in a recent Inspire Magazine published by al Qaeda in Yemen. (Source: MEMRI.org)

Dr. Terry Jones is the Pastor at Dove Outreach Center in Florida. He is best known for his highly publicized Koran burnings, which often spark violent protests in the Middle East, and have led to the issuing of a warrant for his arrest in Egypt. He ran as a write-in presidential candidate in 2012, and on May 31,  filed with the FEC for a 2016 presidential run.