The following article was originally published on the Independent American & Constitutional Review on July 15, 2013. Its author, Joshua Fauver, is the former Southeast Regional Coordinator for the Robby Wells presidential campaign. 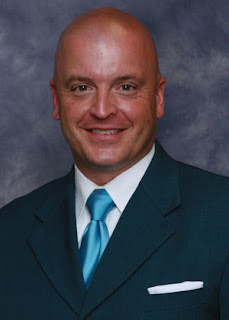 Many of you know that Robby Wells spent most of his professional career coaching collegiate football. Most notably he was the first ever white head football coach of the historically black college Savannah State University. After just two season Wells resigned as the head football coach at SSU. At first the story seemed trivial as Wells cited personal reasons for resigning his position as head coach saying, “At this point I have to think about my family and my health before I can think about anything else. I wish the players well as they pursue their dreams on and off the field. My thoughts and prayers will be with them as they continue to progress in their collegiate career.”

“This memo is written as a follow-up to our meetings on January 19, 2010 and January28, 2010, and pursuant to your verbal instructions of yesterday to write a resignationletter in order to keep my pay and benefits through March 2010, as we agreed onJanuary 28th. When you and Dr. Flythe unexpectedly called me in off the road from recruiting and wemet on January 19, 2010, and Dr. Flythe stated to me that I would never have thesupport of the SSU alumni or reach those individuals because I am White, and that Iwould never have the support of the citizens of Savannah, because I am White and myfiancé is Black, I knew you had already made a decision about my future at SSU. Thatevening, I was unable to sleep and was physically ill.”   (The full letter can be read here)

It was when this happened the story really broke. Wells’ story would go on to be picked up by ESPN as well as the USA Today. The story of a historically black college firing their first white head coach for being white was just too appealing a story to pass up on.  The question, was Robby Wells really fired because of his race? Or was it a different reason all together? Ethics perhaps?

Let us investigate the details surrounding Wells’ career and resignation. What is often lost amid the accusations of racism on the part of Savannah State are the allegations of unethical behavior on the part of Robby Wells. There was one news outlet, however, that did cover this aspect of the story in a piece titled “Betrayal of Trust”. (There publication of this story can be viewed here) Among the slew of charges of unethical behavior that were levied against Wells, (all of which can be viewed here) the most troubling include donations not going through university channels, lacks integrity, business practices led to the misuse of travel money during the 2008 football season, not program driven but individually driven, self promoter, among many, many, many other things.

So what of this accusation of “business practices led to the misuse of travel money during the 2008 football season”? The following information will be a exert from the aforementioned article entitled “Betryal of Turst” which, again, can be viewed here.


“Corcillo asked Wells to give a 15-minute speech at the conference on Jan. 26 and to deliver a keynote address the next morning. Wells also received roundtrip airfare, per diem and a night at the hotel.
On Jan. 19, Flythe and Suggs met with Wells. Flythe said he told Wells he could resign or be fired. Flythe said he gave Wells 24 hours to decide and instructed him to contact Suggs with his decision.
Flythe said Wells ignored his instructions and flew to Las Vegas, where he was paid $1,000 to speak at the National Association for Alternative Certification’s conference for teachers. Flythe said he and Suggs did not see Wells from Jan. 19 until Jan. 28.
Judy Corcillo, executive director of the association, sent an e-mail to Wells on Aug. 25, 2009, in which she gave him an itinerary for Jan. 26-27, 2010, at the Red Rock Casino, Resort and Spa in Summerlin, Nev.
In a Dec. 21, 2009, e-mail Wells asked the association’s administrative assistant, Kanasha “Kay” Trent, if she would book a flight for his fiancee.
“I will be happy to supply you with the payment up front,” Wells wrote. “Her name is Alkeisha Miller. Everyone calls her Nicole.”
On Jan. 25, Wells flew from Charlotte, N.C., to Las Vegas. The next day, Flythe said, he told Suggs to get Wells to return to SSU for a meeting.
“He said he was away, recruiting for the university,” Flythe said.
Flythe, however, had documents showing Wells was not recruiting but was being paid to speak at the conference.
On Jan. 27, Wells returned to Charlotte.
He met the next day on campus with Flythe, Suggs and Tonia Mydell, Flythe’s assistant. Wells resigned following that meeting.”

You can find the information about Wells’ trip to Las Vegas here,

Another issue involving Mr. Wells’ career as SSU was his television show. It very quickly became an issue with the University after it first aired. Wells’ failed “to provide an outline of the show’s content and failing to provide “a financial disclosure list in accordance to NCAA rules and our agreement.””  SSU athletics director Bart Bellairs did alert Mr. Wells’ to this matter and it seems to have continued to be a problem. To view the e-mails between Mr. Bellaris and Mr. Wells’ click here.

There was one other issue that came up that puts Wells’ claim of race being the grounds for his termination into question. The following is another exert from the article titled “Betrayal of Trust”:

Bellairs, SSU’s first white athletics director, was hired five months after Wells.Bellairs resigned Nov. 23, 2009, to become the athletics director at Southeastern Louisiana University. During a May 18 interview, he said he never encountered racism at SSU and left for more money.
The day Bellairs resigned, he and Suggs, then the athletic department’s senior woman administrator, submitted memoranda on their evaluations of Wells at Flythe’s request.
Bellairs cited 14 concerns about Wells, including: “Lack of Protocol – goes around the system” and “Self Promoter – Cares more about his image than his team” and “Truthfulness – needs to be honest.”
Suggs cited 15 concerns, including: “Lacks integrity” and “Business practices that led to his misuse of travel money during the 2008 football season.”
On Dec. 18, 2009, Wells signed a memorandum stating he understood his employment for 2010-11 was contingent upon his compliance with his job description.
Then, on Jan. 11, 2010, Flythe said he received a call from Suggs saying she, Dawson, golf coach Art Gelow and sports information director Opio Mashariki needed to see him because they feared Wells would get SSU in trouble with the NCAA.
They met with Flythe, who said he told them to draft a letter documenting their concerns. The next day, they submitted their letter to Flythe, who showed it to Yarbrough, who told him to give a copy to Steffen, the SSU attorney.
Flythe said Steffen told Yarbrough, “These are grounds for termination.”  (for more information click here)

These facts really bring Wells’ claim of racism being the reason for his termination into question. When you pair this information with all of the other points of concern that the university had with Wells it would stan the reason they were justified in requesting his resignation. Between ethical problems his financial issues and the problem with his show it is no wonder why Wells lost his job as head coach at SSU. Why would Wells pull the race card? Seeing how Wells was called the “T.V coach” at SSU and was described as being a self promoter as well as self driven. I would think he took advantage of SSU being a historically black college and him being the first white head coach. He wanted to save face.

Robby Wells initially announced he would be running for president as an independent candidate, but that wouldn’t last long. The previously posted link was posted in December 4th of 2011. By January 5th of 2012 we can find a report that Robby Wells is seeking the Reform Party nomination. (here) In what would be the short time that he was seeking the Reform Party nomination Wells was able to make some “noise” so to speak. He did participate in a Reform Party Presidential Candidate Forum. His questions and answers can be found here. This of course would also not last long, as soon Wells would be seeking the nomination of another political party.

Robby Wells did stick in for the long haul while seeking the Constitution Party nomination. He saw it all the way through till the bitter end, and it was a bitter end. Of course you are already aware that Virgil Goode won the Constitution Party nomination in 2012 on the first round of voting; Wells placed a distant third receiving about 14% of the vote. Robby Wells’ story wouldn’t end here though. If anything, it would only get all the more interesting.

After losing the Constitution Party nomination at the national convention in April of 2012 RedPhillips of the Independent Political Report contacted his campaign to see if was still running for president. The answer was a yes. (For the full story click here) It is here where things really starting getting strange.

Robby Wells releases a statement claiming he has received the endorsement of the Republican Conservative Union to seek the Republican nomination for president from the convention floor. Before we dive into this, lets answer the all important question; who is the Conservative Republican Union? Well this is all I could find on this mysterious entity. But here is an exert from their description:

There is much to do, and much to be undone; Liberalism, Communism, Libertarism and Democratic Values have infected our Country and the infection needs to be stopped, and removed. Conservative Republican Union is a conservative organization dedicated to giving hundreds of thousands of hardworking, patriotic Americans across the country a strong collective voice in the political process. Our goal is to counter the well-financed antics of radical left-wing groups like MoveOn.org and Libertarian groups from lying to Republicans trying to convince them that we are all Republican, WE ARE NOT, being a Republican is being a Conservative. We educate, train and organize by appealing to the grassroots “silent majority” to take action — contacting government and business leaders; placing newspaper, radio and television ads; and holding the Left accountable for their anti-American antics and the Libertarians from taking away our party.

Not only did Robby Wells claim to have the CRU’S endorsement, he claimed to have the backing of over 700 Republican delegates. Observe the following: 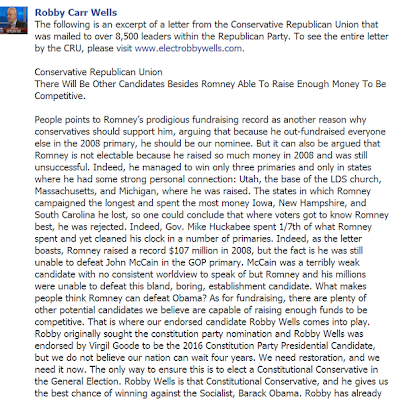 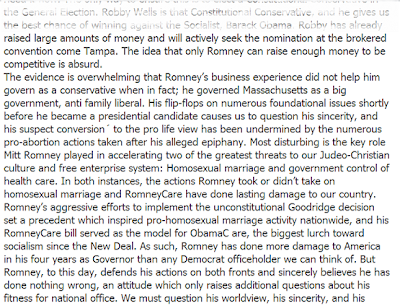 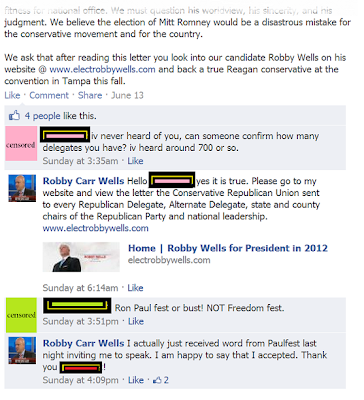 But posting it on Facebook wasn’t enough. No, no, no, Robby Wells had to go on air and say that he was going to march on Tampa, Florida with the support of the CRU and it’s some 700 delegates. You can find that blogtalkradio interview here,

But Robby Wells didn’t stop after not catching on, at all, in 2012. No, before the 2012 election had even taken place Robby had announced his candidacy for 2016. He has been actively campaigning already and visited several states on the campaign trail as well as spoken at liberty fests across the country. With a record like his we have to ask ourselves a serious question, is he the right choice for this movement? I’m not saying he is a foe, but a faux.

If you would like to learn more about Wells you can do so by visiting the following links:
http://savannahnow.com/news/2011-11-21/robby-wells-settles-ssu-lawsuit-says-hes-running-president#.Uc6TD5x6TIU