For a long time now we have all been aware of some of the more fringe figures of the Constitution Party. We all know of Don Grundmann, Don Stone, and Riley Hood. We are all well versed in the party’s stance on gay marriage, and are familiar with the extremes to which the previously mentioned individuals have taken it. We are even aware of their deep felt hatred toward the followers of the Islam faith. (see here) We had all safely assumed that these were the worst the constitution party had to offer, and their opinions on matters of homosexuality and Islam were the worst things about the Constitution Party. That was until recent events. 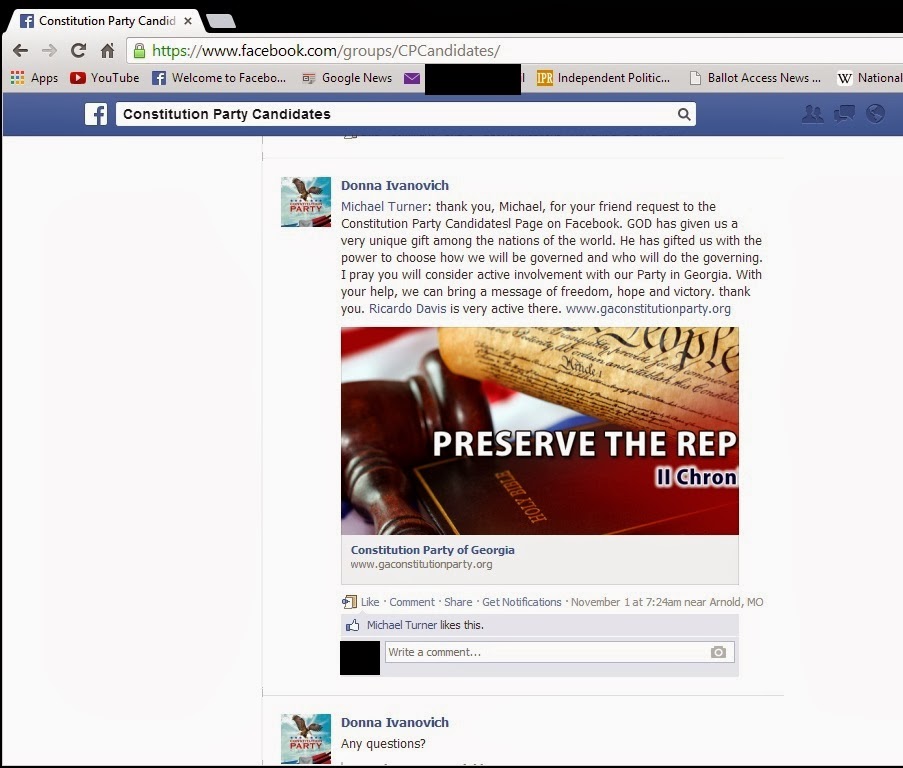 Almost immediately after being added to the group Mr. Turner started posting articles that some would not expect to find in a Constitution Party Candidate’s group page.

So by now you may be asking, “What could possibly have been posted in their group page that is worse than the things espoused by Grundmann, Stone, and Hood?” Well, I’ll show you what. The following is a screenshot of an article posted in the group page by Michael Turner: 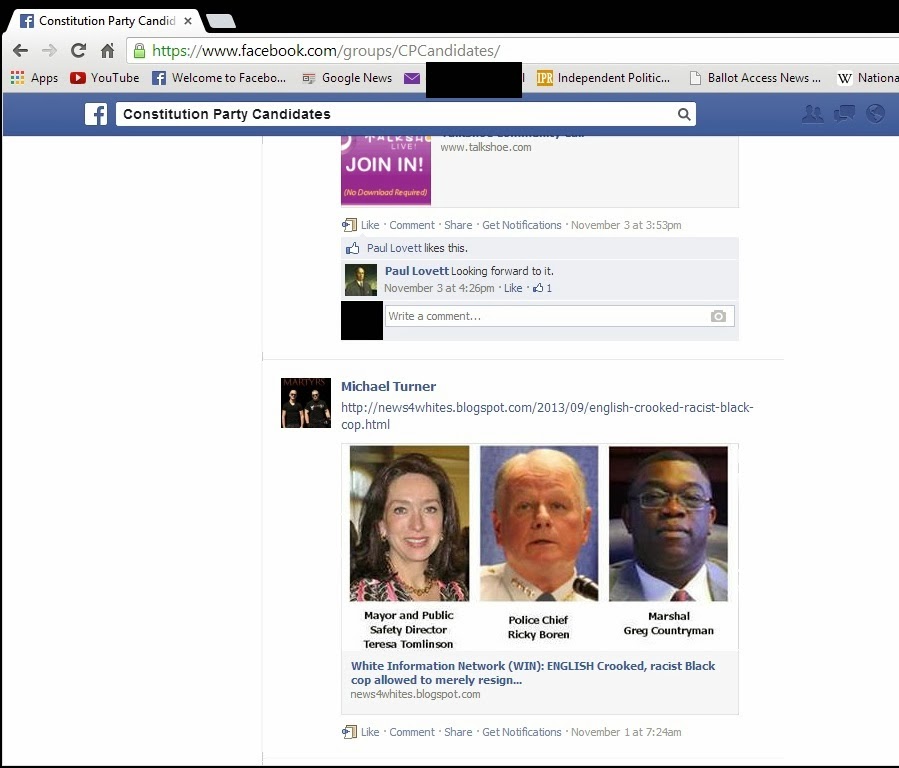 I’m sure the first thing you noticed was the title of the article posted, “White Information Network (WIN): ENGLISH Crooked, Racist black cop allowed to merely resign.” Odd to say the least, right? Did you happen, however, to notice the url? “news4whites.blogspot.com” Here we see White Information Network, and news4whites. More interesting than the article itself is the blog whose article it comes from. The author of the piece is a gentleman by the name of Michael Weaver.

Just who is this Michael Weaver character? (see here) Michael Weaver is a “White Nationalist Activist” from Columbus Georgia and former member of the National Alliance, having received their 2008 “Activist of the Year” award. (For those who are unaware, the National Alliance was a “white nationalist, anti-Semitic, and white separatists political organization.” They ceased to operate as a membership organization in 2013.)
Weaver came into fame, if you will, for distributing nearly 100,000 fliers and pamphlets in the Columbus area that attacked illegal immigration, affirmative action, and Jewish influence in the Mainstream Media. Weaver would later be arrested for committing a hate crime and was sentenced to two years in prison and banished from the Columbus metropolitan area for an additional 9.

Knowing now who Weaver is, and looking back at the name of his blog, he hardly seems like the character whose writing you would find in a Constitution Party Candidate’s group page. Surely this was just a one-time occurrence right? If it was I certainly wouldn’t take time out of my day to write about it. Mr. Turner would go on to post three more articles in the group page that were either by or about Michael Weaver. 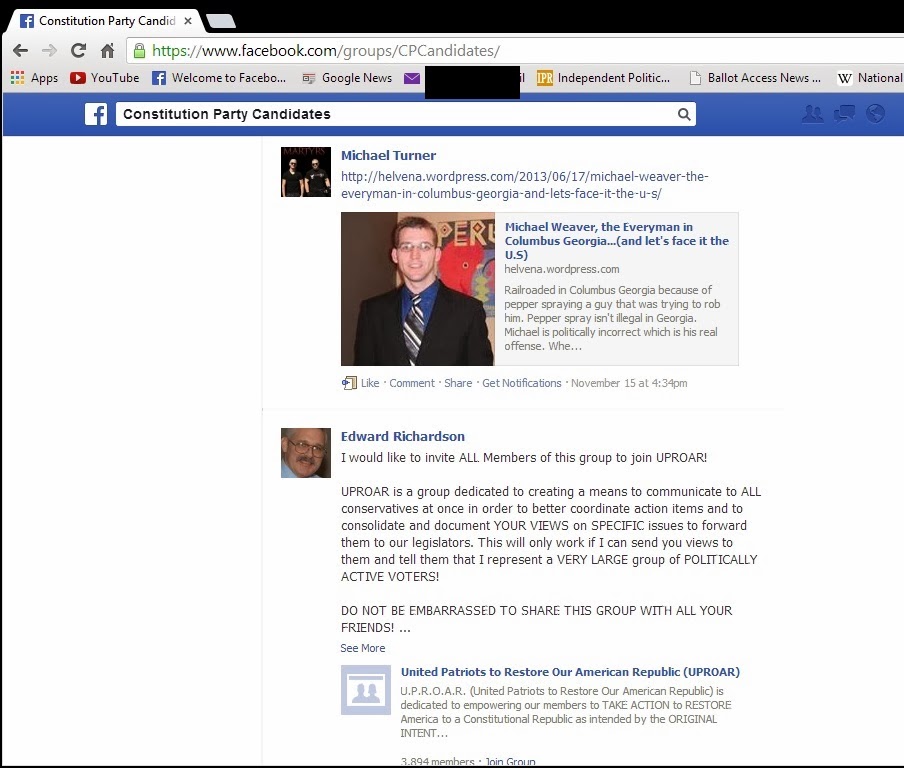 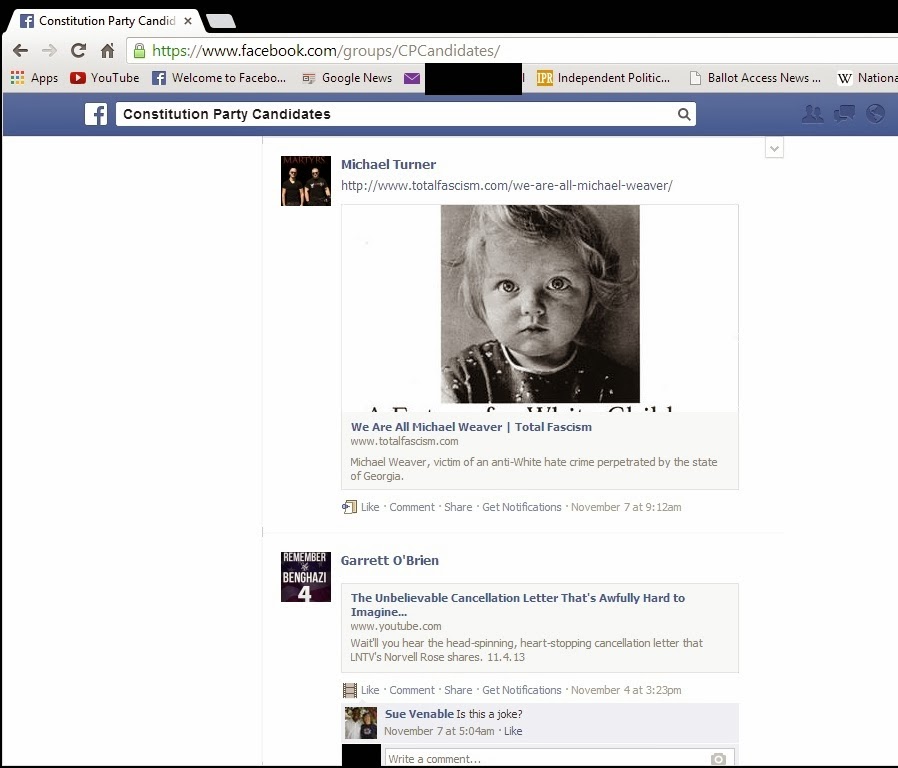 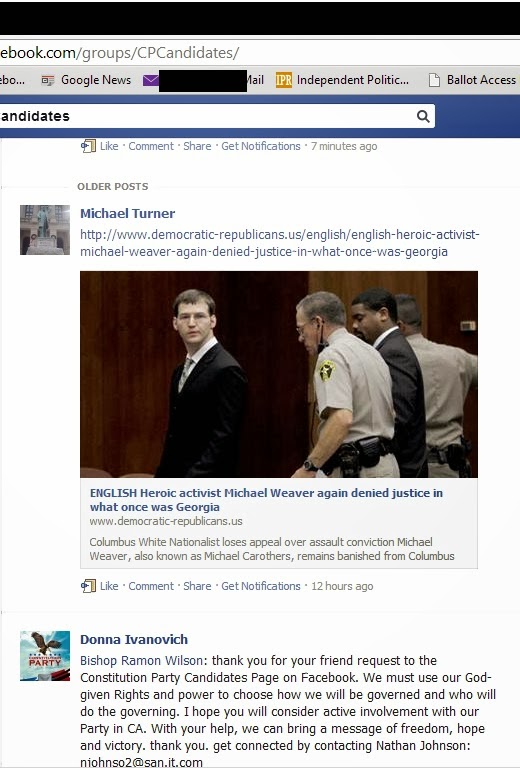 Let’s take a look at some of the other photos posted in the group page by Mr. Turner. One of particular interest even got a “like” from Constitution Party activist Michael Berotcchi. 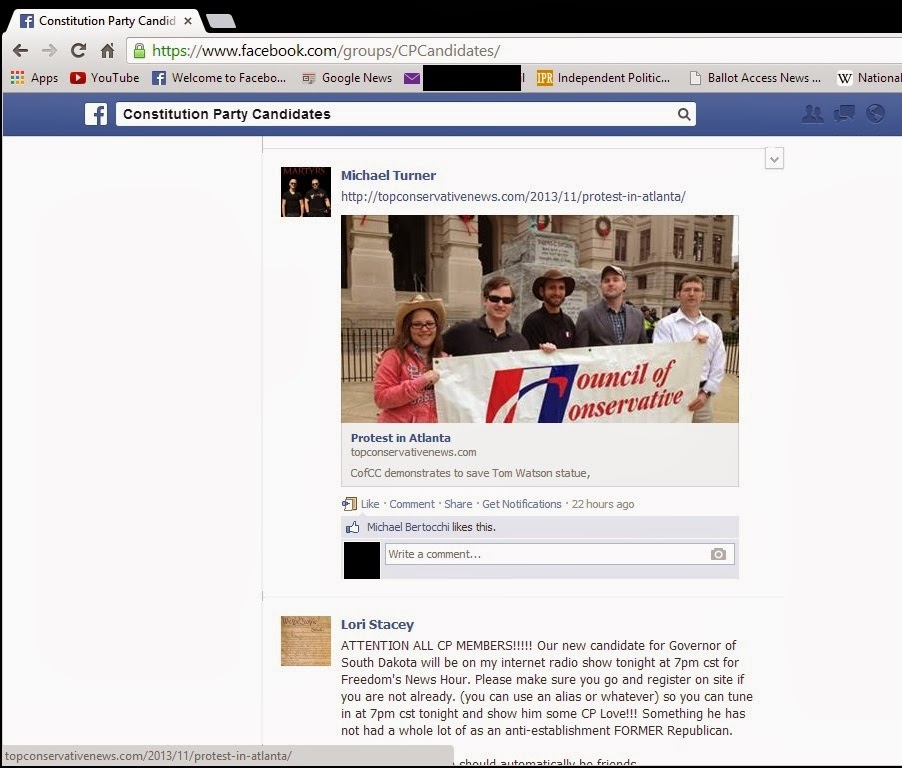 Now Council of Conservative Citizens seems innocent enough at first glance. In fact, it even sounds like a group you’d expect the Constitution Party to be fond of; that is until you take a look at their Statement of Principles. Right near the top, number two in fact, says this.

“We believe that the United States derives from and is an integral part of European civilization and the European people and that the American people and government should remain European in their composition and character. We therefore oppose the massive immigration of non-European and non-Western peoples into the United States that threatens to transform our nation into a non-European majority in our lifetime. We believe that illegal immigration must be stopped, if necessary by military force and placing troops on our national borders; that illegal aliens must be returned to their own countries; and that legal immigration must be severely restricted or halted through appropriate changes in our laws and policies. We also oppose all efforts to mix the races of mankind, to promote non-white races over the European-American people through so-called “affirmative action” and similar measures, to destroy or denigrate the European-American heritage, including the heritage of the Southern people, and to force the integration of the races.”

But it doesn’t stop there, no no no, it goes on. Their sixth principles says the following,

“We believe in the traditional family as the basic unit of human society and morality, and we oppose all efforts by the state and other powers to weaken the structure of the American family through toleration of sexual licentiousness, homosexuality and other perversions, mixture of the races, pornography in all forms, and subversion of the authority of parents.” (see here.)

The Council of Conservative Citizens is nothing more than a white supremacists, white nationalist organization operating under the guise of being a conservative organization. Looking at its principles, it hardly seems like an organization we would expect the Constitution Party to be affiliated with in any way, shape, or form.

For the sake of your time I won’t go into further details about the other articles posted by Mr. Turner and two other gentleman, suffice it to say they promote fascism and the Aryan race. 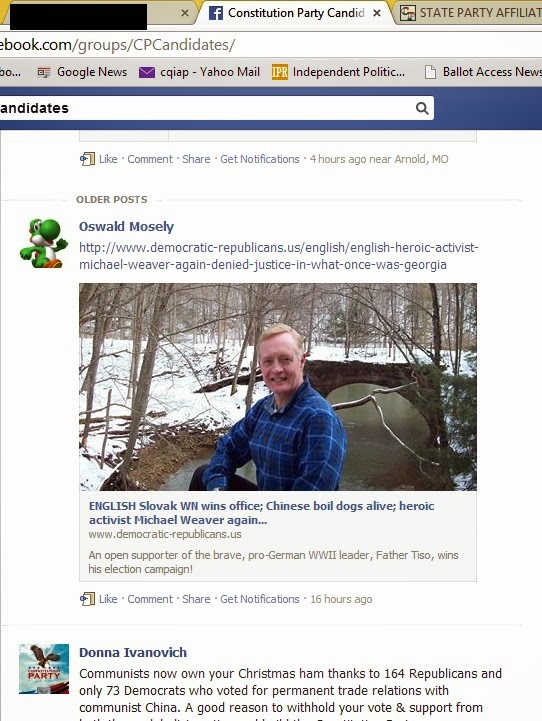 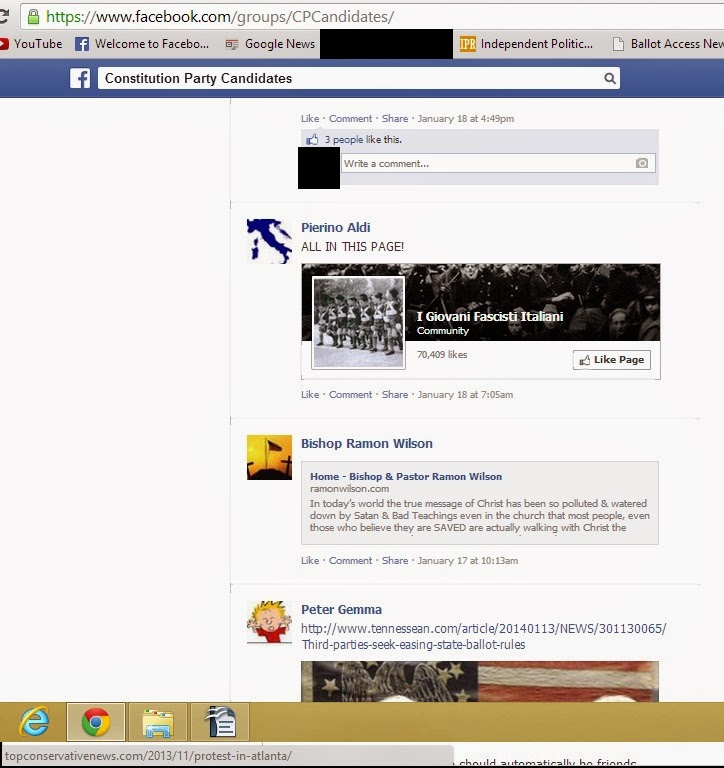 It was by stumbling onto this post on Storm Front that I found another. There was a certain gentleman posting in the forum under the name of “Patriotic Activist.” This gentleman turned out to be a Mr. John Ubele, a Constitution Party candidate for the Florida State Legislature in 2008. (You can find a piece about Mr. Ubele here, a critique of his blogs here, and proof of his run as a C.P candidate here.)

Mr. Ubele isn’t the only white supremacists to run under the C.P banner though. No, there was one candidate of much higher notoriety who ran for office on the C.P line, a certain Michael Peroutka. Yes, Peroutka also has ties with white nationalists. Peroutka has been a long term member of the “League of the South”, who the Southern Poverty Law Center described as an “explicitly racist hate group” that “believes the ‘godly’ nation it wants to form should be run by an ‘Anglo-Celtic’ (read: white) elite that would establish a Christian theocratic state and politically dominate blacks and other minorities.” Peroutka has spoken at their national conference in 2004, 2008, and 2012. But it isn’t enough that Peroutka is just affiliated with a white nationalist movement, he’s also said some very white supremacists sounding things himself. In 2004 he wrote the following on his blog, “I am proud to be a member of the League of the South. I look forward to receiving the support … from guys with Confederate flags in their trucks.” He also appeared at a League of the South conference where he thanked them for their endorsement of his 2004 presidential campaign (again he was the Constitution Party candidate that year.) and said, “If this be hate, let’s make the most of it.” He would also go on to be a quest on the white supremacists radio show “The Political Cesspool”; The Montgomery Advertiser reported that one of the bedrock principles of the show Peroutka appeared on is the need to “grow the percentages of Whites in the world relative to other races.” (As reported by The Human Right’s Campaign, and The Southern Poverty Law Center )

One other member of the Constitution Party with a history of affiliation with white supremacists is none other than the newest member of the national executive committee, Peter Gemma. Gemma was the head of design, marketing, and advertising for the aforementioned Council of Conservative Citizens as well as the media coordinator for their capital region. In 2000 Peter appeared with David Duke and Don Black (both former leaders of the Ku Klux Klan) at an event meant to raise money for the fascist, whites-only British National Party. He is a member of Florida’s ResistNET Tea Party, along with White Revolution founder Billy Roper. Also, much like Peroutka he appeared on the radio show “The Political Cesspool.” (as reported by The Southern Poverty Law Center.)

Much like me, this probably came as a bit of a shock to you. I certainly had no inclination that the Constitution Party was affiliated with so many various white nationalist organizations, nor did I know that various figures in the party had deep and longtime affiliations with these groups. But knowing what I do now I have to question Howard Phillip’s last minute speech at the 2008 Constitution Party national convention in which he railed against Alan Keyes, who was reported to be a close friend of Howard’s. Were his last second remarks, that many believe cost Keyes the nomination, motivated by Keyes’ race? Knowing all we do now, that certainly has to be a possibility and even a plausibility. It is perfectly conceivable that the reason that Keyes lost the nomination was because of an attitude of white superiority.