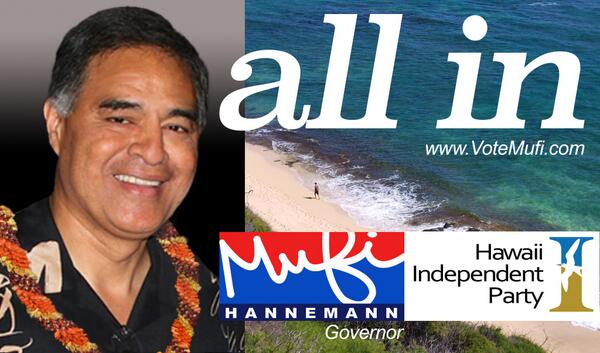 Over the past several months, I have met with hundreds of people across the state, listening to their concerns and asking for their ideas on how we can make Hawaii a better place to live, work, and raise their families.

The one consistent theme that has emerged from talking story is that people are frustrated and disappointed with our government and definitely feel we deserve better. In particular, they’ve told me that four years ago, the current state administration vowed a “New Day,” filled with words of hope and optimism. But the reality is that people are still waiting for that promise to be fulfilled.

After much reflection and serious consideration, I have accepted the invitation of the Hawaii Independent Party to run as their candidate for governor of Hawaii. The party is seeking a clear alternative in this year’s gubernatorial election, and I am offering my candidacy as:

• someone who will put people first by listening and collaborating, rather than ruling by decree;
• someone who has a solid record of achievement as an executive and manager, and who as mayor of Honolulu assembled a very capable, non-partisan team that left the city a better place than we found it;
• someone with a proven leadership style who can work cooperatively with the legislature, county governments, business and labor organizations, and community groups to get things done;
• someone who has the track record in developing successful public-private partnerships that will benefit our state by bringing together stakeholders in Hawaii, the nation, and the Pacific; and
• someone who emphatically believes that Hawaii’s best years lie ahead of us and will work diligently and tirelessly to create a better future for us and our children in the most dynamic region in the world—the Pacific Asian Basin.

Our journey will be arduous and difficult. However, I am up to the task and am looking forward to this exciting challenge.

I humbly ask for your support and prayers so we can bring about the change we need for our blessed home: Hawaii.