In 1999, Saturday Night Live parodied the battle between paleoconservative icon Pat Buchanan and entrepreneur Donald Trump for control of Ross Perot’s Reform Party.  Social issues dominated the debate as Trump and Buchanan both sought the party’s presidential nomination.  Today, more than 15 years later, the two are finding common ground as Trump mounts a Republican presidential campaign that may ultimately lead to an Independent run.

In July 1999, Newsweek Magazine ran an article reporting that an unnamed “close friend” of Trump claimed that Trump was “toying” with the idea of starting a presidential campaign, allegedly in response to rumors that the party’s duly elected Governor of Minnesota, Jesse Ventura, was courting former Connecticut governor Lowell Weicker, Jr. to run for the party’s presidential nomination.  Trump purportedly held a grudge against Weicker for blocking his plans to build a casino in Bridgeport in 1994, and for a war of words between the two that saw Weicker label Trump a “dirt bag” and Trump refer to Weicker as “a fat slob who couldn’t get elected dog catcher.”  Eventually, Weicker decided not to seek the party’s nomination citing infighting.  Thereafter, Ventura reportedly encouraged Trump to run.

Trump did not publicly move toward a run until September 1999, when Buchanan, then a Republican presidential candidate, himself confirmed interest in the Reform Party nomination during an interview on Larry King Live.   Trump derisively labeled Buchanan’s socially conservative views as “prehistoric” and said that he may mount a campaign out of respect for Ventura.

The next month, just before Buchanan was to announce his switch to the Reform Party, Trump announced that he had left the Republican Party and formed an exploratory committee to run for the Reform Party’s presidential nomination.  Roger Stone served as the committee’s director.  Commenting on the party switches, the CSMonitor observed:

The irony in the possible Buchanan-Trump matchup is that both men left the Republican Party to get away from the likes of each other. Buchanan says he left because the party had lost its way on core principles, such as the abortion issue.  Trump says he quit because “the Republicans are just too crazy right,” a comment that he could easily have been aiming at the Buchananites . . .

During this period, Trump embarked on a media tour.  He touted Oprah Winfrey as his ideal running mate.  Referring to Buchanan’s hypothesis that Nazi Germany posed no direct threat to the United States, he said:

In response, Buchanan said he would not engage in name-calling exchanges, but made a thinly veiled attack against Trump, saying, “I don’t believe the Reform Party nomination can be bought, and I don’t believe the Presidency can be bought.”  Pat Choate, the 1996 Reform Party vice presidential nominee came to Buchanan’s defense over the “Hitler lover” comments, arguing that Trump:

needs to learn not to delegate his reading and thinking, because Pat Buchanan never said that and doesn’t hold those positions.

During Trump’s exploratory period, he released a book of his political positions entitled The America We Deserve.  Those positions were largely adverse to Buchanan, including a pro-choice stance on abortion, tough prosecution of hate crimes against gays, support for bans on assault rifles, a substantial tax on the assets of the wealthy to pay off the national debt, and universal health care.  However, for the most part, it shared Buchanan’s views on fair trade, constraints on immigration, and increased military spending. Trump dropped his candidacy after Jesse Ventura left the party in February 2000 due to the unseating of pro-Ventura chairman Jack Gargan.  Trump commented that the party was too divided to be successful.  Buchanan would go on to win the party’s presidential nomination over Natural Law Party nominee John Hagelin. whom the Perot faction ultimately backed.  Buchanan appeared on the ballot in 49 states and received 0.43% of the popular vote on Election Day.

On June 19, he published The Anti-Politician, in which he wrote:

Though he has been a hugely successful builder-businessman, far more successful than, say, Carly Fiorina, who has been received respectfully, our resident elites resolutely refuse to take Trump seriously.

They should. Not because he will be nominated, but because the Trump constituency will represent a vote of no confidence in the Beltway ruling class of politicians and press.

Votes for Trump will be votes to repudiate that class, whole and entire, and dump it onto the ash heap of history.

Votes for Trump will be votes to reject a regime run by Bushes and Clintons that plunged us into unnecessary wars, cannot secure our borders, and negotiates trade deals that produced the largest trade deficits known to man and gutted a manufacturing base that was once “the great arsenal of democracy” and envy of mankind.

A vote for Trump is a vote to say that both parties have failed America and none of the current crop of candidates offers real hope of a better future.

On July 7, he published Trump and the GOP Border War, commenting:

Trump’s success comes from the issues he has seized upon — illegal immigration and trade deals that deindustrialized America — and brazen defiance of Republican elites and a media establishment.

By now the whole world has heard Trump’s declaration:

Yet, is Trump not raising a valid issue? Is there not truth in what he said? Is not illegal immigration, and criminals crossing our Southern border, an issue of national import, indeed, of national security?

The reaction to Trump’s comments has been instructive. NBC and Univision dropped his Miss USA and Miss Universe contests.

The reaction of Trump’s Republican rivals has been even more instructive. Initially, it was muted. But when major media began to demand that GOP candidates either denounce Trump or come under suspicion or racism themselves, the panic and pile-on began.

What Trump has done, and [Ted] Cruz sees it, is to have elevated the illegal immigration issue, taken a tough line, and is now attacking GOP rivals who have dithered or done nothing to deal with it.

Trump intends to exploit the illegal immigration issue, and the trade issue, where majorities of middle-class Americans oppose the elites. And he is going to ride them as far as he can in the Republican primaries.

In the coming debates, look for Trump to take the populist and popular side of them both. And for Cruz to stand by him on illegal immigration.

Americans are fed up with words; they want action. Trump is moving in the polls because, whatever else he may be, he is a man of action.

Trump later retweeted and thanked a follower who cited to Buchanan’s labeling of Trump as “a man of action.” 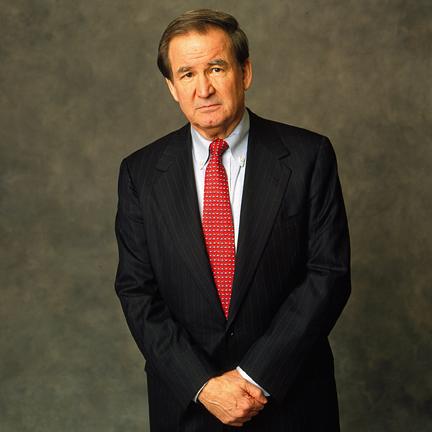