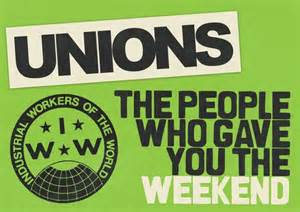 From a Green Party email blast:

It honors the American labor movement and the contributions that workers have made to the strength, prosperity, and well-being of our nation.

But it’s important that we take a moment to stop and remember just what this “day off” (that many workers still don’t enjoy) really cost.

So, pardon us for a short history lesson; but sharing the facts of this 3-day weekend is important– because a lot of people died for this “day off.”

Labor Day became a federal holiday in 1894, after thirty states had already recognized it.

But it came at a terrible cost.

You may have heard vaguely of the Pullman Strike. Most factory workers who built Pullman train cars lived in the company town of Pullman on the South Side of Chicago, controlled by the company’s owner, George Pullman.

In spring 1894, the company laid off workers and slashed their wages, but still expected them to pay Pullman his full rent for their homes.

Eugene V. Debs had earlier founded the American Railway Union (ARU), made up mostly of unskilled railroad workers. With the rent crisis in Pullman, the ARU signed up the factory workers making the train cars as well, and tried to negotiate with the company, but Pullman refused.

When a strike against the factory didn’t go well, the ARU called for a massive boycott against all trains that carried a Pullman car. It affected most rail lines west of Detroit, and at its peak involved some 250,000 workers in 27 states.

Riots broke out as starving workers faced off with police and Pullman’s private security force, the late 1800’s version of Blackwater. Violence broke out in many cities. President Grover Cleveland called out the Army and the U.S. Marshals, who killed thirty people.

The government belatedly saw that they needed to recognize the power and anger of the workers in some way, and six days after the end of the Pullman strike, Congress voted to make Labor Day a federal holiday.

How The Date Was Chosen

It was no accident that President Cleveland and Congress chose the September date.

You see, the burgeoning international socialist movement of the time had chosen May 1, or May Day, to be International Workers’ Day, also known as Labor Day. They wanted to honor the struggle for the 8-hour workday and the Haymarket Massacre, which happened in Chicago on May 4, 1886.

The May 4th protest in Chicago began as a peaceful rally in support of workers striking for an eight-hour day and protesting the killing of several workers the previous day by the police.

However, someone threw a bomb at police. The bomb blast and ensuing gunfire resulted in the deaths of seven police officers and at least four civilians; scores of others were wounded.

So, for the American Labor Day, President Grover Cleveland and Congress chose a September date in an effort to distance American workers from their counterparts and supporters around the world.

This Labor Day, remember the truth: Every gain workers have made has come because they banded together to fight for their rights. Nothing is ever just given to workers. Nothing.

Today we tend to think of Labor Day as the end of summer. We hope this email reminds you that it’s much, much, more—and our work will not be done until every worker receives a fair wage, benefits, and a 40-hour week—including holidays like Labor Day.

From the 2014 Green Party of the United States Platform, page 32: The right to organize unions, bargain freely and strike when necessary is being destroyed by employers and their representatives in government. Today, nearly one out of ten workers involved in union organizing drives is illegally fired by employers who wage a campaign of fear, threats, and slick propaganda to keep workers from exercising a genuinely free choice… And as union membership falls, so do the wages of all working people, union and non-union alike. We support efforts to overcome these legal handicaps, especially in the South and Southwest where the laws are most hostile. We also must dedicate ourselves to fighting for a complete overhaul of this country’s labor laws. We support the irreducible right of working people, without hindrance, to form a union and to bargain collectively with their employer. We also support the right of workers, without penalty, to inform other workers on the premises of a union being formed. This includes advertising and recruiting. The right to organize has been eroded and diluted over the years by incremental infringements and restrictions, especially by the Taft-Hartley Act of 1947 passed over President Truman’s veto. We stand for repeal of the Taft-Hartley Act. The right to organize has also been diminished by an aggressive anti-union offensive by employers who have undermined the law, and in many cases, brazenly violated it.

This entire weekend, especially on Monday, please say “thank you” to everyone who works!

Most of the world’s workers labor day and night, often for miserable bosses and at poverty wages.

That includes all of the women who work as mothers and homemakers, yet receive no social security or health benefits in recognition of raising a family. Not to mention an almost total lack of child care at the workplace for mothers employed outside the home. Or the fact that women (and African Americans) are still paid less for the same exact job compared to white men.

How Will We Even The Playing Field With Rapacious Employers?

With your help. Since we don’t take corporate money, our alliances are clear and clean: we stand with workers. Our party truly is “people-powered politics.”

Standing in solidarity with other workers starts with a simple, heart-felt “thank you”.

It’s small. But it sure matters.

And this weekend, when you see someone who is working because they don’t get the day off and/or can’t afford to take a day off, be sure to give them an extra pat on the back.

Have a GREAT weekend full of fun, friends, family, and gratitude for all of us who work.

P.S. Some Good Labor News to Start Off The Weekend: A new ruling could give a big boost to the Fight For 15! The National Labor Relations Board gave “outsourced” workers a new tool to hold employers accountable. In a landmark 3-2 decision issued August 29, the National Labor Relations Board expanded the definition of “joint employer” to include not just the boss that directly employs the worker, but also the company that controls that workers’ labor conditions indirectly by contracting with the boss. Let’s hope the new ruling boosts the Fight for 15, by expanding the power of “outsourced” workers to organize and hold corporations accountable.