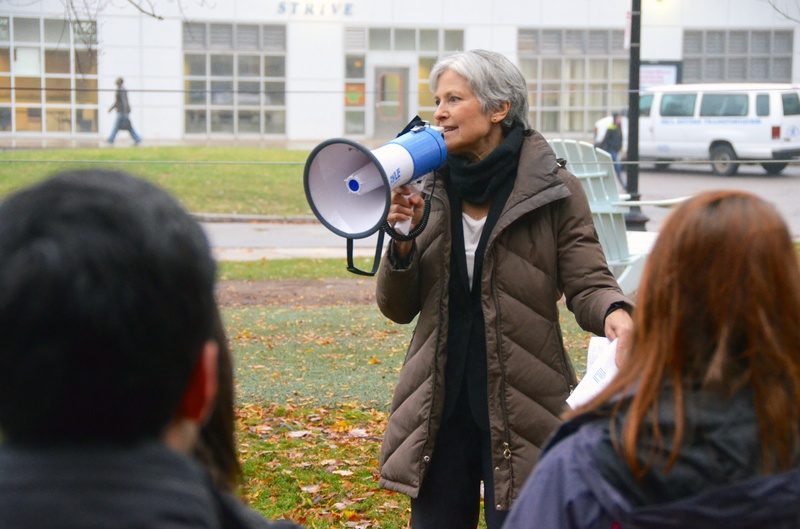 The last time that Jill Stein ’72-’73 ran for President of the United States, she was arrested at a national debate.

While fellow Harvard graduates Mitt Romney and Barack Obama took to the stage, Green Party candidate Stein was barred from the forum. When she showed up anyway, she was removed from the site and handcuffed to a chair at a nearby police facility for hours, well after the crowds and press had left.

Now in the thrust of her second campaign for Commander-in-Chief, Stein faces an uphill battle against the two mainstream parties. But with the same activist mindset that she was introduced to as an undergraduate at Harvard, along with a steadfast belief in her political principles, and an absolute willingness to be arrested again, she has far from given up hope in her ability to make a difference.

While she is known today for marching outside of coal plants and protesting in foreclosed homes, many of Stein’s first encounters with activism took place in Harvard Yard.

As an undergraduate during the Vietnam War and Harvard College’s first move toward co-ed housing, Stein’s college career was marked by significant social movements that swept over the student body.

During Stein’s freshman year, she witnessed the historic 1969 Harvard student strike, when students stormed and occupied Massachusetts Hall to protest the University’s relationship with the military until police officers forcibly removed them.

It “was a historic time…for the University, for women, for the peace movement and the social justice movement,” Stein said, noting that the Vietnam War “was a very powerful engine for social engagement.”

Concentrating in Social Relations—a combined major of anthropology, sociology and psychology—Stein credits Harvard for introducing her to “a level of dialogue that was very elevated and compelling.”

“It really required you to figure things out and take a stand,” Stein said. “I learned how to write at Harvard and learned to analyze things.”

The article goes on to say:

The center of her Presidential platform is a Green New Deal, her plan to revitalize the economy and environment by providing jobs in the sustainable energy sector.

With the goal of reaching full employment by providing a job to every American who wants one, Stein hopes to replicate key aspects of the New Deal legislation of U.S. (and also Harvard Crimson) President Franklin D. Roosevelt, class of 1903.

“It revives the economy, creates well paying living wage jobs that we desperately need at the same time that it greens the economy and the energy system and therefore turns the tide on climate change and makes wars for oil obsolete,” Stein said. “It’s a win-win.”