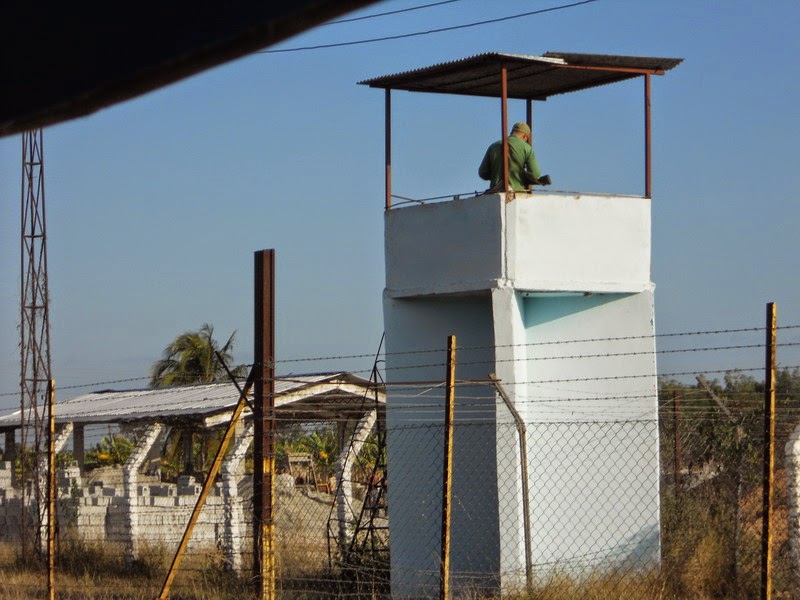 The civil rights and human rights case regarding the two jailed Cuban libertarian activists just took a dark turn. As of this afternoon, Mises Cuba reports that Ubaldo Herrera Hernandez and Manuel Velazquez Visea are incarcerated in Cuba’s infamous Melena II prison. Various human rights groups have documented conditions at Melena II, and it’s Cuba’s equivalent of the Gulag in Soviet Russia and the labor camps in North Korea.

Five Libertarian state parties (Nevada, New Hampshire, Oklahoma, Indiana, and New Mexico) and the Libertarian Party of Spain (P-LIB) have already published denunciations of the Cuban government and the Communist Party of Cuba, and these parties are calling for the immediate and safe release of the political prisoners.

Ubaldo Herrera Hernandez and Manuel Velazquez Visea were originally arrested by State Security (the secret police) and the National Police on the night of February 2 and were being detained at a jail facility in Mayabeque Province. Less than 2 hours ago Mises Institute Cuba (an independent Cuban organization based on the American Mises Institute) reported that Herrera and Velazquez are believed to have been convicted of attempted assault. In truth, Herrera was targeted for his “dissident activities” of getting people together in a room to discuss limited government, civil liberties, and free markets.

Mises Cuba staff members Nelson Rodriguez Chartrand and Heriberto Pons Ruiz both testify that Herrera and Velazquez have been transferred to Melena II, a labor prison outside of Melena del Sur, near Havana. Thanks to refugees like Esteban Marcial Mosqueda, whose testimony was published by retired U.S. immigration judge Susan Yarbrough, we know exactly what conditions the two jailed libertarian activists are facing.

“There were no beds and no sheets so I slept on the floor with the other men. The toilet was a hole in the floor, and it overflowed everyday. At night the rats and roaches came through it, and sometimes a snake. Our food was beans once a day, and it was always filled with insects and worms. We got a pail of water every other day; it was for drinking, but it was so dirty it made us sick… Many months and many guards went by. Most of them would call me negro azul [blue-black, because of his dark skin]… I was very thin by then, and it was very easy for them to pull down my pants.”

In 2011 the Committee to Protect Journalists confirmed the existence of Melena II, and the labor prison’s appalling conditions. The Spanish-language Cuban-American news venue Let’s Talk Press reported appalling conditions and human rights abuses in the Melena II prison as recently as 2015. The Spanish-language Cuba news venue Café Fuerte reports on the forced labor conditions. “‘We are subjected to a twelve-hour work day in the sun, melting and raising blocks or working in the field,’ said a labor convict at the Melena II prison’s collective farm… The Melena II prison houses more than 600 convicts, mostly young black men. They work by making cement blocks.”

Now that the Cuban libertarian activists Herrera and Velazquez are in the Gulag, it’s now more important than ever for supporters of human rights across America and around the world to take action. Libertarians from around the world are already taking the fight back to the Cuban government. In one example, a French supporter demanded their release on the Ministry of Foreign Relations’ French-language Facebook page.

All concerned citizens in all countries can help by doing these things:

1) Publicly condemn the Cuban government and the Communist Party of Cuba, and demand the safe release of the libertarian prisoners,

2) Ask the US State Department to place diplomatic pressure on Cuba for their release,

3) Call Senators, Congressmen, Governors, and State Legislators to make their own statements of support for these political prisoners and to ask the State Department to diplomatically pressure the Cuban government. Find your Congressman here and contact his or her office, and tweet at your governor.

4) Directly contact Cuba’s Ministry of Foreign Relations and demand the safe release of Ubaldo Herrera Hernandez and Manuel Velazquez Visea. Send them a message on Facebook and tweet directly at them.

The Libertarian Party of Nevada isn’t advocating for sending the Marines to Havana; we’re simply rallying free people around the world to call out a human rights abuse against one of our own flock. We the People must never give in to evil, but fight boldly against it. #TodosSomosMisesCuba