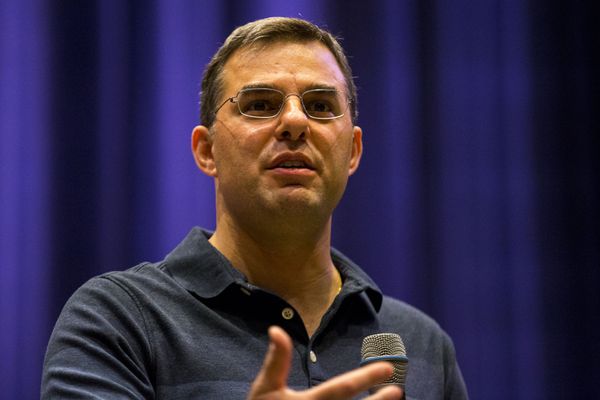 Justin Amash is reconsidering his place in a party he is at odds with, isolated from Republicans that have largely bent to the will of the president.

The Michigan Republican is gaining a national following as a Congressman who isn’t afraid to buck the Republican line, often going to toe to toe with the party’s biggest star, President Donald Trump. Amash is a frequent critic of the president, often slamming Trump on Twitter, accusing him of violating the constitution and attacking Trump’s character.

And now Amash is leading the charge for a third-party presidential option – even going so far as saying he “can’t rule out” running for president as a Libertarian.

“I think my message does resonate with a lot of people,” said Amash, now in his fifth Congressional term. “There are people who are tired of the way it works and are coming to understand that the problem is this two-party duopoly and the partisan fighting that is nonstop. If people came to Washington with strong ideologies but less partisanship this would be a lot better.”

While Trump faces a growing crowd of Democratic presidential hopefuls, no Republican have yet to present a serious primary challenge to the president.

Amash is hesitant to throw his hat in the ring, but said “someone” needs to run for president to fix what he considers to be a broken system that values party loyalty over integrity. Amash, who hails from West Michigan’s Cascade Township, has flirted with the idea of a presidential run at libertarian events and an interview CNN’s Jake Tapper, but told MLive he hasn’t “thought through” plans to run for president, re-election or U.S. Senate.

Despite describing himself as “the only libertarian in Congress” Amash remains in the Republican Party. At times, Amash feels politically “lonely” within the GOP, and wonders whether there are other ways “to be useful and effective as an elected official besides the approach I’m currently taking.”

Amash has recently become more vocal about the need level the playing field for third-party candidates.

He introduced a bill requiring states to impose the same ballot access requirements on all candidates, regardless of party nomination status or affiliation. It would also prohibit straight-ticket voting for congressional elections.