In an email to its supporters, the Nader campaign gives the world its first glimpse into Nader’s much-hyped “super rally.” The event in Denver was planned to protest the Democratic convention and to help get Nader into the debates.Â The email from the campaign is posted below, with a link to Free Speech TV.

Last night in Denver was a wild party for democracy.

Sean Penn hit it out of the ballpark.

Tom Morello sang a glorious version of Woody Guthrie’s This Land is Your Land.

Cindy Sheehan ripped into the dastardly twins (Democrats and Republicans).

Two new supporters came out of the woodwork to support Nader/Gonzalez.

When we asked for donations, Brooke Smith, star of ABC’s Grey’s Anatomy, rose out of the crowd, took the stage, pledged her support — and $4,600 — to the Nader/Gonzalez campaign.

Then we had another convert.

A 21-year-old African American from Phoenix — Rev. Jarrett Maupin — gave an eloquent speech as to why he’s breaking with the Democratic Party, and vowed to organize the Latino and African American communities for Nader/Gonzalez.

And off course, Ralph laid it on the line, as usual.

So, few people were able to watch on line.

But Free Speech TV says they will put up highlights from the rally up on its website soon. 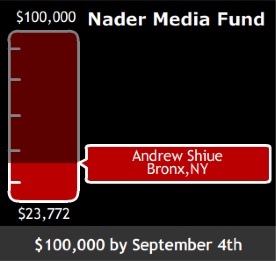 So, take a peek at this amazing show, and then get the DVD (see below).

But we have to crank it up to meet our goal (we haven’t missed one yet — good job troops).

Let’s get it done.

Remember, if you give $100 or more now, we’ll send you three DVDs — the Denver rally, the Minneapolis rally, and a special debate DVD. (Three DVD offer ends September 4 at 11:59 p.m.)