Socialist Party USA: Socialism and the Spirit of Tahrir Square

We send greetings to the working people of Egypt on the day of their victorious struggle to depose the dictator Hosni Mubarak. Their grassroots movement provides definitive proof to the world that radical political activity can change the course of history. The activities of the protesters in Tahrir Square transformed the idea of democracy from a stale ritual that occurs every few years to an open ended struggle for freedom. We are inspired by the example provided by this mass revolt of the Egyptian people. 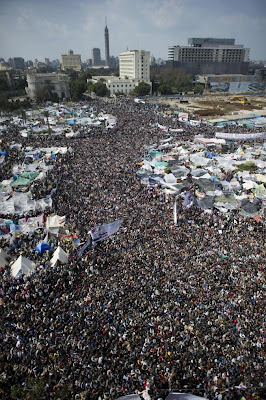 It is particularly important to recognize the central contribution made by the
working class to the defeat of the dictator. While the occupation of the square and the street demonstrations in several cities galvanized the resistance, it was the mass strikes carried out by the workers that broke the back of the regime. On February 9th thousands of workers demonstrated the ability to shutdown the entire society and economy until their demands were met. After these mass strikes, the regime understood that surrender was its only option.

The victory of Tahrir Square need not be an isolated one – limited only to the
removal of one dictatorial regime. The revolt was as much about the conditions imposed on Egyptians by capitalism – the lack of food, the unemployment, the poor housing, the declining environment – as it was about Mubarak. We can all join in the spirit of struggle initiated in Cairo by demanding a democratic socialist society where the needs of human beings are placed ahead of those of corporations.

See Tahrir Square for what it is – an open-ended struggle for freedom. And what the dissident voices in Egypt and many others parts of world are demanding are things that capitalism cannot deliver. In Egypt, the reorganization of an independent trade union movement, the experiences of direct democracy in the protests and the revitalization of a socialist left in the country offer greatest hope for advancing the political agenda for economic freedom developed in Tahrir Square.

As socialists located in the US, we pledge to continue to do our part in the international struggle for socialism. We see our own political activity as a part of the larger international movement for jobs, peace and freedom. As a part of a Socialism for the 21st Century!