A few hours prior to the event, three FBI Joint Terrorism Task Force agents visited the Center to inform them that there was going to be a demonstration.

Local activists, including members of the Memphis Socialist Party, gathered at the Mid-South Peace and Justice Center yesterday to file Freedom of Information Act requests as part of a nationwide day of action against recent FBI harassment of anti-war and international solidary activists. A few hours prior to the event, three FBI Joint Terrorism Task Force agents visited the Center to inform them that there was going to be a demonstration. They left after they were told that the Center was not only aware of the event but had planned it. 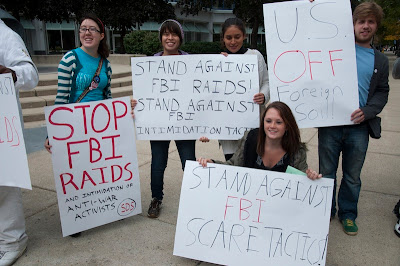 Approximately two hours later, the Memphis Police Department’s TACT unit arrived with at least six unmarked black SUVs and one marked squad car. When questioned about the reason for their presence, they replied that they were there to keep the peace. The Center was eventually able to get into contact with the unit’s chief, who made a vague statement about a call from a “concerned citizen.”

On the same day, at least two activists (including the Chair of the Memphis Socialist Party) had their homes entered by the Shelby County Sheriff’s Department on the pretext of warrants issued for failure to appear in court. In both cases residents were not given the opportunity to view the warrant, despite multiple requests. At the deCleyre Cooperative, police entered without permission through an unlocked door and moved through every room with their guns drawn, searching for someone who hadn’t lived there in years.

Why were residents not allowed to see the warrants used to enter their homes? Why was the TACT unit, described by MPD’s website as “not subject to regular calls,” and “responsible for handling barricade situations, hostage rescues, counter terrorism, and high risk felony apprehensions,” sent to respond to a single, unverified phone call? How is it a coincidence when the same group of activists is targeted by three separate law enforcement agencies on the same day?

The FBI has a long history of intimidation, harassment, and repression, but we refuse to be silenced by it. We will continue to stand in solidarity with our activist brothers and sisters.