The Green Party’s Jill Stein has clinched her party’s presidential nomination after celebrating a major victory in yesterday’s California primary, winning 49% of the vote against her chief contenders, television comedienne Roseanne Barr and public servant Kent Mesplay. The California win followed other recent Stein victories in Michigan, Florida, and Iowa.

With 182 delegates required to win the nomination, and 194 delegates now in hand, Stein will go into the Green Party convention in Baltimore, July 12-15, with a clear majority of delegates. She has won over 66% of all delegates allocated, and 27 of 29 Green Party primaries, with the next nearest candidate, Roseanne Barr, at 22%.

Stein, a medical doctor who once ran against Mitt Romney for Governor of Massachusetts, is proposing a Green New Deal for America that will create 25 million jobs, end unemployment, and transition our country to a green economy. Her proposals will also guarantee public higher education and Medicare for all, break up the big banks, and end corporate domination of elections.

“Voters will not be forced to choose between two servants of Wall Street in the upcoming election,” said Stein. “Now we know there will be a third candidate on the ballot who is a genuine champion of working people.” 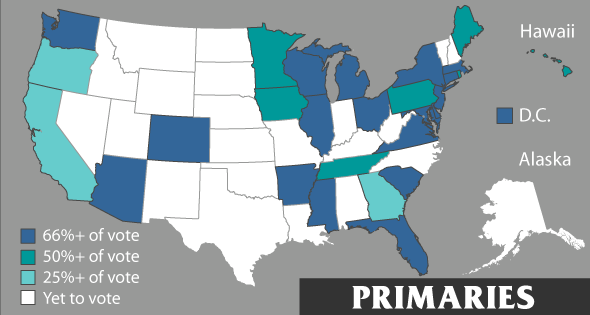 Dr. Stein played a key role in the effort to update fish advisories in Massachusetts and beyond to better protect women and children from mercury contamination, which can contribute to learning disabilities and attention deficits in children. She also helped lead the successful campaign to clean up the “Filthy Five” coal plants in Massachusetts, an effort that resulted in getting coal plant regulations signed into law that were the most protective at that time. Her testimony on the effects of mercury and dioxin contamination from the burning of waste helped preserve the Massachusetts moratorium on new trash incinerator construction in the state. She led referendum fights in 11 legislative districts calling for local green jobs, and in 2011 she co-led the alliance of the Black Empowerment Coalition and the Green-Rainbow Party that successfully doubled the seats representing communities of color in the Massachusetts legislature, reducing historic racial gerrymandering.

Jill Stein represented the Green-Rainbow Party in the race for Massachusetts State Representative in 2004 and for Secretary of State in 2006. In 2006 she won the votes of over 350,000 Massachusetts citizens, the greatest vote total ever for a Massachusetts Green Party candidate.

To make a donation celebrating her securing of the nomination, see http://www.jillstein.org/donate