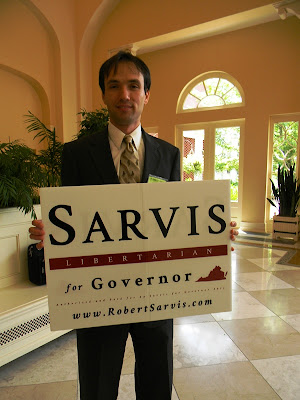 Robert Sarvis is the Libertarian Party nominee for Governor of Virginia. He is running against Republican Ken Cuccinelli and Democrat Terry McAuliffe. On August 3rd, he received some coverage on nbc29.com about his trip across the state to talk and meet with voters. A video is available at the link below:

Sarvis also has been included in a recent opinion poll. From Ballot Access News:

A Roanoke College Poll for the November 2013 Virginia gubernatorial race shows: Republican Ken Cuccinelli 37%; Democrat Terry McAuliffe 31%; Libertarian Rob Sarvis 5%; undecided 27%. See here. The poll was released almost two weeks ago. The poll shows that Sarvis draws equally from voters who would vote for Cuccinelli if Sarvis weren’t running, and voters who would vote for McAuliffe if Sarvis weren’t running.