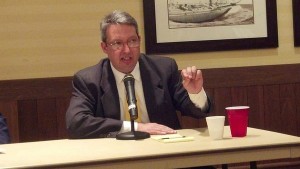 “This week, the two candidates stayed neck and neck, and the only ‘mover’ in the race was Wyllie, who showed gains just outside the margin of error,” said 0ptimus’ founder and analyst Brian Stobie. “We view this is a backlash to the two highly negative campaigns saturating Florida airwaves, particularly from those in our modeled undecided voter universes, who seem to be leading this trend toward Wyllie.”

Adrian Wyllie, the Libertarian candidate for Governor of Florida, has filed a Federal lawsuit aimed at forcing his inclusion in a debate scheduled for October 15, 2014 at Broward College. The suit that debate organizers’ criteria was set arbitrarily and in a manner to specifically exclude the LP’s candidate for governor.

The campaign notes that using the 2006 criteria for inclusion, Wyllie would have earned a spot on stage without much difficulty. To read the full lawsuit, click here.

The complaint in the above link is a 25-page .pdf file.