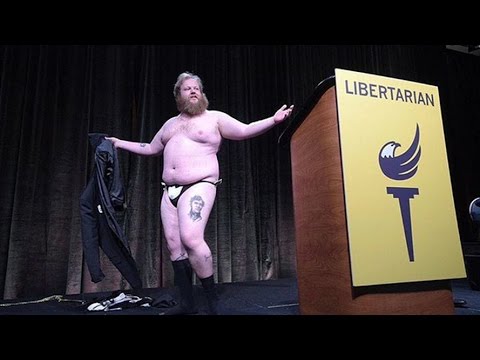 I would like to issue a public condemnation of the Libertarian Party of Michigan Executive Committee, regarding the suspension of James Weeks II. The exception to this would be the two members who voted against this absurd motion, Tiffany Hayden, and my friend Jeff Wood.

As the true party of freedom, we should practice what we preach. If you are not harming another person or their property, your actions are between you and your God, or the laws of nature should you exercise freedom of religion by not having one.

Around 30% of Americans share our views but our presidential candidate is polling at 12% right now. The norm for our state parties is single digit percentages of the electorate. That leaves only one conclusion, that we have bad leadership, marketing, and are not practicicing what we preach.

I became a libertarian gradually over time, and was doing legislative work and only recently became involved in the party in the last couple years. I was dumbfounded as I was attacked by strangers for my tattoos, or choice to be friends with people of other faiths or beliefs. To be judged by ones appearance without consideration of years of pro liberty activism, and with no effort to get to know me, was something I never considered as a possibility with this party.

My path to Libertarianism involved alot of hard truths and intellectual honesty. I was a Conservative Republican, but as time went on, I could not reconcile things if I used the same criteria to evaluate them.
How could I dictate what someone does in their private bedroom but demand nobody dictate what happens in my gun safe? Even before I learned that drug prohibition causes more drug use, I had to confront the fact that legal prescription drugs kill more than all street drugs combined, let alone alcohol and tobacco.
I eventually realized the only logical conclusion was to let people be free, so long as they aren’t harming others or their property.

I did not support Darryl Perry, I do not agree with some things he promotes. But he hit the nail on the head, as he quoted from the LPM Platform:

“People have the right to engage in any activity that is peaceful and honest, and pursue happiness in whatever manner they choose so long as they do not forcibly interfere with the equal rights of others. Libertarians welcome the peace, prosperity, and diversity that freedom brings.”

Mr. Weeks did not violate this, and thus, every member who voted for this is a hypocrite.

In some states the radical caucus is the bad guy. Here in Florida, the former leadership attacked everyone who disagreed with them, by saying they were part of a Fascist conspiracy to take over the party. The same people condemn Mr. Weeks all over social media, as an embarrassment to the party.

The embarrassment to the party is not Mr. Weeks. It is people who want everyone to accept transsexuals but cant accept a confederate flag. The embarrassment lies in those who shove PC bullshit down peoples throats while proclaiming the Non-Aggression Principle. The embarrassment is small minded and self important leadership and party members who have failed at reaching 95% of the people who think like us since 1971, and act as if Mr. Weeks or anyone could possibly be more embarrassing than that. He is not the reason we do not grow faster.

The Libertarian Party is a glass house reduced to shards by all the stone throwing. Here in Florida, we just lost one of the hardest working people we had to the Republican Liberty Caucus due to the personal attacks and infighting. He was the one who got me interested in the party in 2010. We had not spoken for 6 months due to party drama. The first thing I did after being elected to the Libertarian Party of Florida Executive Committee was to make public peace and reunify the factions to the best of my ability. I offered to have a beer and end a conflict to the ringleader of a conspiracy against me personally a few days ago. Why? Because a house divided against itself will fall, or in our case, halt construction.

You do not have to like Mr. Weeks. Or gay people. Or people like me who ride Harley Davidson motorcycles and have tattoos on their heads. I am against some things the Radical Caucus promotes, but many of them have reached out in support when others attacked me. Why? Because they realize the key thing that brought me to this party in the first place:

ALL OF OUR RIGHTS ARE DEPENDENT ON GIVING THE SAME RIGHTS TO OTHERS.

It is not freedom of speech, except you can’t say that. If we ban one book, eventually they will all be banned, as each ebb and flow in the body politic has a new ban in retaliation for the one the other guy passed when they had the power seat. Its a vicious cycle that leads to tyranny. Be consistent! If they can ban the rebel flag, they can ban the rainbow flag. Defend the rights of those you may disagree with, because you only set precedent for your own turn on the chopping block at a later date otherwise.

The reason I came to the LP is because I believe in freedom. If you are here for any other agenda, please leave. The reason I stayed is because of all of the true believers. People like Thomas L. Knapp, who has brutal debates with me, but had the common courtesy to come meet me and ask questions face to face when the douchebag caucus was attempting to smear me. The hardworking people behind the scenes who do much of the heavy lifting. The activists who do something other than insult others on social media. The roughly 1/3 of Americans who believe in freedom and because of the LP failure do not have a political voice, are the people I am ultimately fighting for.

Here in Florida, I am proud to be a part of new leadership, and the future looks promising if we avoid the mistakes of the past. Our day is here, I encourage the membership of the LPM to replace every one of the buffoons who voted for Mr. Weeks to be suspended. Nationwide, anyone using the party to censure people for words, get rid of them. We dont burn heretics at the stake any more. Why? Because new ideas often sound crazy, like the first guy who suggested the earth was round, or the Wright brothers trying to explain their flying machine before they built it.

The power of liberty lies in innovation. There is no end to what mankind can do if they can once again be subjected to the freedom to persue whatever fantastic ideas they may have. The Libertarian Party does not have a winning formula yet, or they would have quarter or more of registered voters. I would argue the only people we should listen to are those with unpopular new ideas.

This party has plenty of room for all the variety mankind has to offer. It is shameful what the LPM has done, and it is an affront to our basic principles. Lighten up. Live and let live. Stop this constant infighting. The Executive Committee is not the place to censure people. Write an article about why your way is a good idea. Debate, write a song, vote for the other, there are plenty of ways to express your difference of opinion.

Brandi Alexandra was critical of James. I am leaning toward her position. He should have practiced and rocked a Chris Farleyesque dance. Next time we see him we will mention it over drinks. See, how hard was that?

If so, you are as Libertarian as we should ever ask of people.

To those who make this worth it and work hard, I love you more than you will ever know.

To the judgemental, the petty, the intellectual fascists, and their ilk, I ask you leave and do something else. I will not sink your level and make you. I will convince, not coerce. Why? I believe in liberty.

16 thoughts on “Ryan Ramsey: I would like to issue a public condemnation of the Libertarian Party of Michigan Executive Committee”