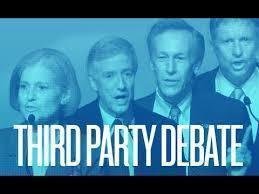 The mantra, indeed the motto, of the Free and Equal Election Foundation is “More Voices, More Choices.” In the interest in living up to that high creed we (the list signatories of this petition) would like to request that the Free and Equal Election Foundation set the criteria for receiving invitation to their Open Presidential Debate at the United We Stand Fest on October the 25th in Boulder, Colorado.

We understand that not every presidential candidate running in 2015 can participate in a presidential debate. We understand that their must be some form of criteria that will limit the number of presidential candidates who will be allowed to participate in the debate. But, again, the mantra of the Free and Equal Election Foundation is “More voices, More Choices.” It is in that spirit, with that high calling in mind, that we express that we would not like the debate to unduly limit the amount of candidates who are able to participate. As Green Party nominee Jill Stein so frequently says “The right to vote means very little if you don’t have the right to know who you’re voting for.”

As we saw in the 2012 Open Debate, four presidential candidates is not so many candidates so as to make the presidential debate dysfunctional. Some might argue that it is the perfect amount, as it allows for the left, center left, center right, and the right to be represented in debate. By using the criteria of being on the ballot of 20 or more states, and inviting the four candidates that meet the criteria, Free and Equal is able to truly give the public “More Voices, More Choices.” It allows voters to hear from more candidates, to hear more ideas, to hear more solutions, and for us to have a very healthy and very needed conversation about the issues facing this nation.

We ask that the Free and Equal Election Foundation use this, being on the ballot of 20 or more states, as the criteria for determining who will be invited to the Open Debate at the United We Stand Fest in Boulder, Colorado on October 25, 2016.

This petition will be delivered to:

12 thoughts on “New Petition: Invite Candidates On the Ballot of 20 or More States To Participate in Open Debate”