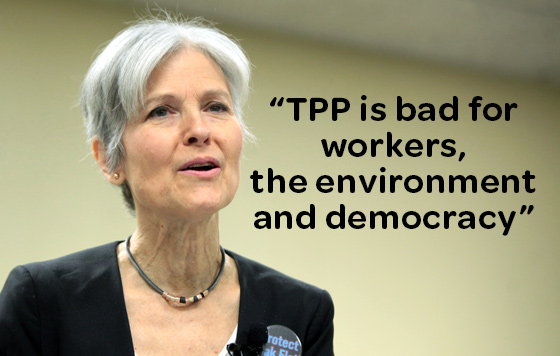 Jill Stein and Ajamu Baraka, the Green Party Presidential and Vice Presidential nominees, stand with the American people in opposition to the Trans-Pacific Partnership (TPP) and the corporate trade agenda of the Obama administration. This agenda includes the Trans-Atlantic Trade and Investment Partnership (TTIP) with Europe, as well as the Trade in Services Agreement (TiSA) being negotiated with 52 countries.

“We oppose these trade agreements because they were negotiated by and for the transnational corporations to serve their interests, at the expense of our workers, our environment and our democracy,” said Stein. “These agreements are a global corporate coup that would make corporations more powerful than governments, providing them with unprecedented power to prevent laws in the public interest that protect workers, consumers and the environment.”

Donald Trump has called the TPP a bad deal, and promised to negotiate a better one if elected. Hillary Clinton, who used to call the TPP the “gold standard,” claims she now opposes it. But recent disclosures by Wikileaks reveal ample reason to be skeptical. In a memorandum from John Podesta dated November 3, 2015, he wrote that Rep. Edward Bernice Johnson (D-TX) claimed she speaks with Clinton two to three times a week and “she was told by the Secretary that the only reason she opposes TPP is to get ‘labor off her back’ and that once she is elected President she will reverse position.” Podesta wrote that he was working to push Johnson to “clarify” her comments because they were “not helpful with labor.” Doubts have run rampant about Clinton’s opposition to the TPP because she has been an aggressive supporter of corporate trade deals, often opposing these deals in election years then reversing her position. This leak reinforces those doubts.

“As the standard-bearer of a party that has been staunchly in favor of bad trade deals like NAFTA, Donald Trump must do more to show that his opposition to the TPP is sincere. We call on Trump to tell his party’s legislators to vote against any attempt to pass the TPP in the lame-duck session,” added Stein.

The Stein/Baraka campaign urges people to join us in supporting the #NoLameDuck uprising that includes actions in Washington, DC and around the country to stop ratification. Our campaign — and the national Green Party — opposes the TPP because it will privatize public services and make healthcare more expensive, food less safe, de-regulate big banks, undermine Internet freedom, clear the way for unlabeled GMO foods and seeds, and provides no enforceable provisions for labor or environmental protection.

“The TPP and corporate trade agreements like it undermine US sovereignty,” said Ajamu Baraka, Vice Presidential candidate. “The TPP undermines the power of Article 3 Courts created by the US Constitution by creating global tribunals where transnational corporations can challenge laws they say will impact their profit margin. US Courts will not be able to review decisions of trade tribunals. Even the US Supreme Court cannot overrule their decisions.”

“The Trans-Pacific Partnership is bad for workers, it’s bad for the environment, and it’s bad for democracy,” continued Baraka. “The Stein/Baraka campaign and the Green Party oppose it without exception, and urge Secretary Clinton and Mr. Trump to demand that their parties oppose Lame Duck ratification.”