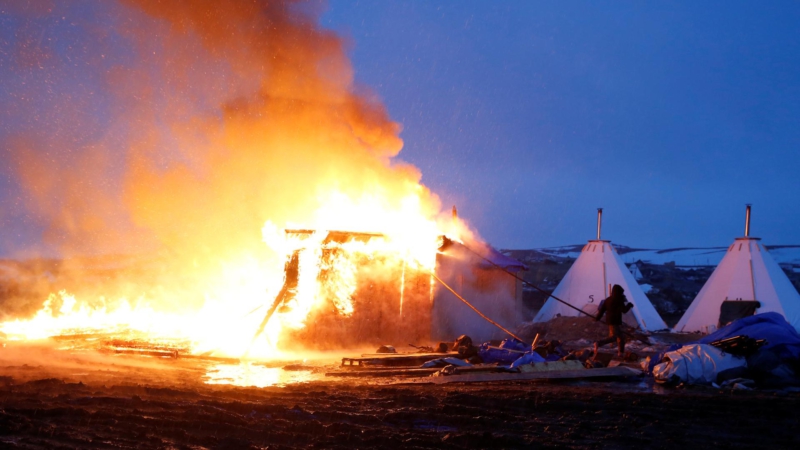 The anti-DAPL (Dakota Access Pipeline) protest camp burned last Wednesday, teepees set ceremoniously ablaze by protesters before the police swarmed in to arrest anyone who dared remain on the camp.

As Donald Trump and his cronies strip away the rights of trans people, Muslims, immigrants, and now Native Americans with his executive order to accelerate the building of DAPL, it may almost seem the world is burning down, engulfed in the wealthy’s insatiable hunger to steal more and more from the oppressed.

The struggle continues, however. This is only another example, as described by Linda Black Elk, head of the Medic and Healer Council at Standing Rock, of “a continued legacy of oppression by the United States government.” DAPL cuts through Sioux historical camps and ceremonial sites throughout its route, as well as being a threat to drinking water and their edible and medicinal plants that grow adjacent to the pipeline. The voices of the nearly 10,000 people who occupied the resistance camp at its peak have been silenced by force.

But as oppression continues, resistance builds. This is not even close to being the end of the struggle against the capitalist machine that pollutes our water and robs us of what is rightly ours. The Indigenous Environmental Network is organizing an action from March 7th to March 10th in Washington, D.C. “in solidarity with Indigenous Peoples across the world and [to] demand that Indigenous Rights be respected.” The turnout is expected to be in the many thousands.

We will continue to fight for that better way to live, for a society where the working class and all the people of the world who have been exploited and oppressed can be liberated. If we are to see poetry in the rising smoke of the Standing Rock protest site, let it be this: this fire will never go out; our rage, our despair, our burning desire for justice will be our tools with which we win freedom for the people.