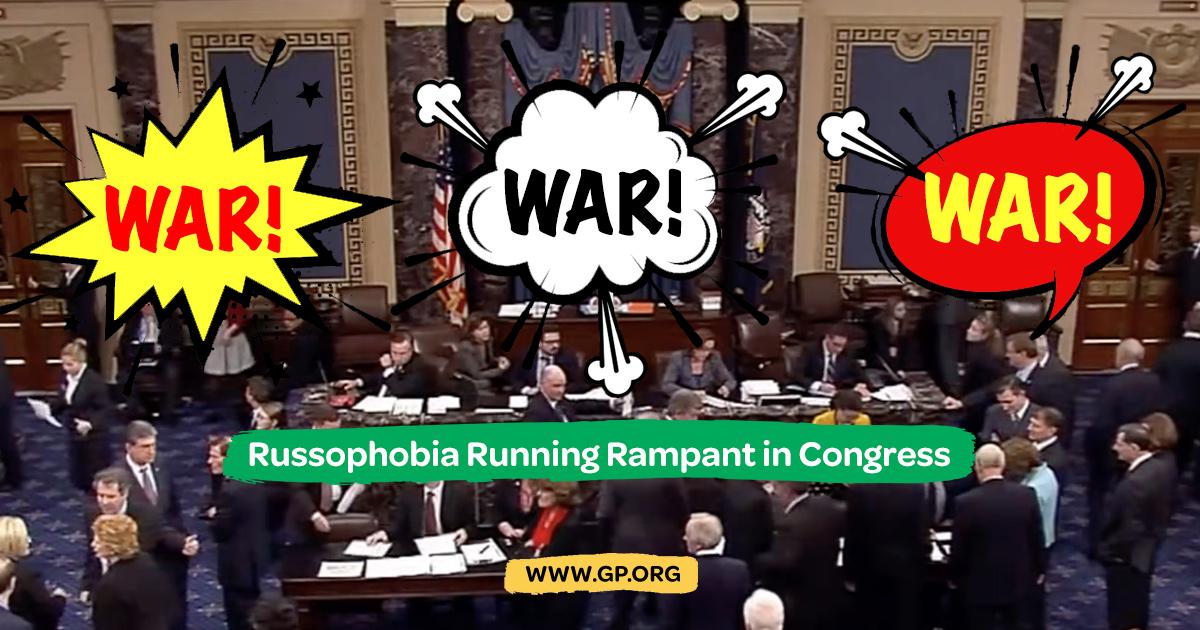 All of humanity is being put at risk by the duopoly of Democrats and Republicans opposition to dialogue with Russia. The combination of Russophobia and the Democratic Party’s compulsion to criticize Trump’s every action, even when he accidentally does something sensible, is preventing the two largest nuclear powers, with the two most advanced militaries in the world, from working together to create a safer and more secure world.

President Donald Trump and President Vladimir Putin finally met for a lengthy meeting. Not much was accomplished, but it might be the beginning of an important dialogue, which could have significant positive impacts.

Russia and the United States are involved in many conflicts where de-escalation is possible if a working relationship is established. There are global crisis situations that could be reduced if the two nations work together, and bring other nations with them, to confront those problems.

Unfortunately, the reaction by members of the political duopoly and media to the Trump and Putin meeting is preventing progress urgently needed by the world. Hurdles are being created to prevent continued dialogue. For example, Russiagate delayed this first meeting and is making detente difficult to achieve.

Partisan Democrats are calling Trump a traitor for even meeting with Putin. They treat Robert Mueller’s indictment, timed just before their meeting, of Russian intelligence officials as if it were a conviction, not an accusation. It is unlikely these cases will ever be brought to trial so we are unlikely to see the evidence. Robert Mueller has a history of “misleading the public as he did when he was FBI director and claimed Iraq had weapons of mass destruction.

There are too many potential conflicts that could lead to war and too many crisis situations impacting millions for the United States and Russia not to be talking. Presidents Trump and Putin should meet again. Before their next meeting the two governments should negotiate progress on at least the following issues so their talks will be meaningful:

These are seven top priorities for diplomacy between the United States and Russia. There are many other crisis issues that the world is facing that a positive relationship between Russia and the US could ameliorate if not resolve — imagine the potential of a world where peace broke-out.

One great hurdle to achieving this progress is the bipartisan view in Congress that favors conflict with Russia rather than a working relationship. Russophobia has been embraced across the spectrum from conservative Republicans like Senator Lindsey Graham (R-NC) to liberals like independent Senator Bernie Sanders (I-VT), who is in the leadership of the Democratic Caucus.

Democrats have demonstrated their support for conflict in their reaction to the Trump-Putin meeting as well as their reaction to the meeting between President Trump and Chairman Kim Jong-un of North Korea. Democratic Senators Tammy Duckworth (Ill.) and Chris Murphy (Conn.)  introduced a bill to prevent Trump from removing US troops from South Korea. On July 26th, the House passed a bipartisan defense authorization that forbid reducing US troops in Korea.  The world wants peace but the United States has two war parties who are both upset by Trump and Putin talking.

Both parties have shown their extreme militarism by passing an irresponsible bipartisan record-breaking military budget. President Trump has shown his desire to  glorify militarism with a military parade. We are working with dozens of organizations to stop the military parade and if it proceeds, we will be part of a mass protest to show the world that the  people of the United States want peace.

US militarism has escalated under Trump with support from both Democrats and Republicans. Achieving detente with Russia could help pave the way for  significant budget cuts and an end to the more than trillion dollar upgrade of nuclear weapons thereby allowing federal spending to be focused on the necessities of the people and the protection of the planet.

It is an imperative for US foreign policy to seek cooperation between Russia and the US to make a more safe, healthy and secure world. To accomplish that the stranglehold of the duopoly war parties must be broken.

The Green Party Platform can be seen here.