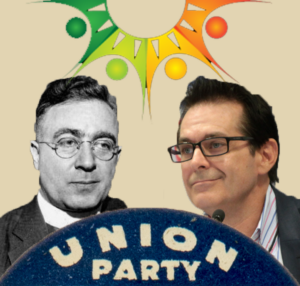 There has been a lot of talk about Movement For A Peoples Party in regards to recent actions they have taken that have been seen as undermining the Left by going hard against AOC and the Squad while cozying up to less than desirable people, all the while I was thinking is there a way to sum it up and there happens to be just that: MPP is the new Union Party. For those that may be unaware let me explain.

In the 1930’s there was a rise in Left Wing Political activity in response to the Great Depression, while many were satisfied with FDR’s New Deal as a way to combat the depression, however there were some individuals who felt that they needed to go further. One of the primary leftist opponents to FDR was Louisiana Senator Huey Long who had an alternative plan called “Share Our Wealth”. While I could talk all about the two plans but the focus is less on the validity of the plan but this is more about the way they planned to implement it. Long had planned to start a separate political party to push for this agenda in the 1936 election, however Long was killed in 1935. Despite this, a group of Longs allies decided to pursue this movement under the moniker the Union Party. I believe enough similarities exist between MPP and them that we can draw direct parallels between the two groups.

First is the obvious connection of forming the party with the intention of forming a populist alternative to the two major parties. Starting off as a vehicle for a particular person (Long with the Union party, and MPP starting off as a way to draft Bernie for 2020). Another aspect which we will touch upon later is the sort of synthesis of populists across the spectrum. The Movement for a People’s Party exemplified this with the inclusion of Jesse Ventura in their convention, who point blank stated he still identified as “Fiscally Conservative and Socially Liberal”. While not as extreme as later examples I will use, it is a similarity worth noting.

A second comparison comes from the party having members and goals that are not so well intentioned. An example from the People’s Party side is the recent revelation their #ForceTheVote pressure movement was actually more to drive a wedge between activists and progressives Democrats in congress. Similarly, the Union Party was created with an ulterior intention of splitting the Left-Wing vote. The fallout of Alf Landon’s presidency would in turn push the Democrats to adopt the “Share Our Wealth” platform for the following election. One minor example from the Union Party Era was the person who ended up being their nominee William Lemke. While Lemke was an overall Progressive Populist, he had a personal grudge against FDR for vetoing the Frazier–Lemke Farm Bankruptcy Act, which is what propelled him to run the Don Quixote-like campaign in the first place. Interestingly enough, despite him being their nominee, he was not the face of the party, similarly to how while Nick Brana is supposed to be the Parties leader he takes a back seat to some other individuals on the advisory board. Speaking of which…

A third comparison revolves around the fact both of the parties’ most vocal supporters are popular figures in a new media landscape. For MPP, that figure is Jimmy Dore. Dore hosts a Independent Media Political Commentary channel on YouTube amassing 373,142,703 views in his channel’s lifetime. While he started off as a radical Bernie supporter he has gradually shifted into a fierce critic of Bernie, the validity of his critiques vary. That is very similar to the primary leader of the Union Party, Charles Coughlin. Coughlin was a populist radio host who had an estimated 30 million listeners tuning into his weekly radio broadcasts. Originally he was a diehard Roosevelt supporter, even claiming God was working through Roosevelt and people stopping the New Deal were anti-God, however by the end of FDR’s first term he had become a fierce critic. Starting off as a sort of Left-Populist Demagogue who’s economics were to Roosevelts Left, but he soon added other aspects to the Party’s rhetoric that tainted it even to other anti-Roosevelt Leftists like Norman Thomas and Earl Browder…

The final noticeable comparison is the accusation that both parties’ coalition has ties to Fascism. Now to tread lightly, I personally am not accusing MPP of being Fascist, HOWEVER some of the individuals they have chosen to align with do raise suspicion. Back to the Dore/Coughlin comparison, Coughlin became an open Anti-Semite who expressed open sympathies with Hitler and Mussolini as the antidote to Capitalism and Communism. Dore, while of course not suggesting the latter thankfully, has been known to have quoted a paper by Kevin Strom a well known Neo-Nazi twice. Another comparison that may be a bit more blatant is the comparison of another one of the parties prominent supporters Niko House, host of his own YouTube channel. While I could compare him to Coughlin as well, another comparison I can make is with Gerald L.K Smith. Smith was similar to Coughlin, using Christianity to push people to his causes and also was pretty blatant in his anti-Semitic and fascistic tendencies. Niko similarly had formed some interesting coalitions of his own. Working with notable Far-Right activist Jack Posobiec, giving an interview for his Anti-Antifa propaganda film and also appearing on Posobiec’s OAN Show to spew conspiracies. The interview begins with Posobiec claiming that Niko is “someone who comes to politics from the left, but also from a more populist standpoint”, implying that Posobiec is either the real populist or is a populist in his own right.

Now I am aware the essay may come off as me trying to hurt MPP or Minor Parties in general, but I am making it blatantly clear, neither is the case. I myself am greatly supportive of Minor Parties, I voted for Howie Hawkins in a Swing State. And this is also not an effort to disparage the Movement For A Peoples Party itself, I signed the People’s Party Pledge myself, I do not believe everybody involved in the movement are acting in bad faith or are crypto-fascists. Not even everyone in the Union Party was ill intentioned either, Francis Townsend being a prime example. The point of this essay/paper is simply to note the comparisons between the two groups and raise attention to the concerns of the dark path that the MPP may be heading down if they are not careful. I want a viable left wing movement independent of the Two-Party System as much as everyone else, but we need to make sure that does not become corrupted as well.