The Alliance Party sent out the following release Friday reviewing the party’s activities during the year 2021.  The party previously sent out a monthly newsletter but I have not received it via email since June 2021.  Additionally, I previously placed the party in the IPR category Non-left/right parties, but this release specifically disavows that label.  They refer to themselves as left wing and so now are categorized as Socialist/left parties.

As 2021 comes to a close we thought it would be a good idea to take a look back and share the vision for 2022.

Coming out of the 2020 election, where we finished 5th nationally in total votes, we began the year with a change in leadership. Vice Chair and one of the party founders Michael Burger retired. National Committee member Jonathan Etheridge was selected to fill this position. National Chair Jim Rex semi-retired with a move to National Chair Emeritus. Our vice-presidential candidate Darcy Richardson was selected to fill this position.

We created opportunities to grow our party both organically through the creation of new Alliance Party affiliates in Tennessee, Kentucky and Mississippi, as well as through affiliation with established state parties such as the American Delta Party of Delaware, and the Reform Party of Florida.

We began the year with the theme of “Intentionality”, meaning that everything we do would be with a purpose and with the intention of moving forward toward our goals. We have remained true to this.

Due to Darcy’s personal and health concerns we made a switch at the top in March. Jonathan Etheridge became the National Chair and Darcy became Vice Chair.

In our intentionality we spent the first three months studying election results, trends and set the goal of becoming the party of the future rather than the next election. A massive undertaking ensued which culminated in a re-brand with new messaging which allowed us to target the voters of the near and distant future.

In April we revealed this new brand with a new logo which has proven to be successful in reaching and attracting our targets as we moved into different social media platforms. Although our unique approach makes it hard for us to be labeled, thankfully, this new look took us out of what most might call the ‘centrist’ position on the political spectrum with a move to what others might call the “left”. Countless studies demonstrated the future voter is making a parallel move.

This allowed us to rightly proclaim ourselves as the “Party of the Future” leaving the Republican Party and its minor party allies to target the “right” and the Democrats to target the “Center”. There is no other party which seeks to elect a different kind of politician; one that term limits themselves and works for the people and not corporations or special interests while leading with an agenda that is both progressive, rational and rooted in common sense for all people. With this we can empower the people to control their own destiny asking everyone to forsake the ways of the past, but instead to “Own Your Future”.

Coming out of the summer we had great candidates that did a wonderful job. 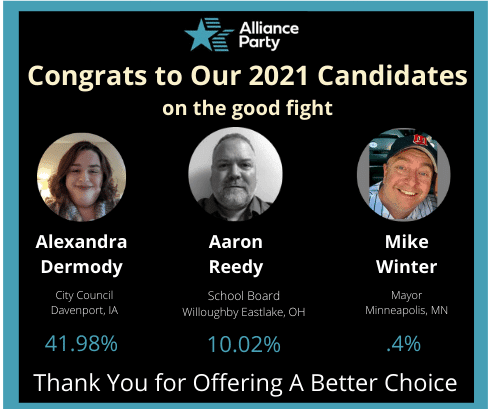 As the year wound down we began to turn our attention to 2022.

We look to build local “chapters”, if you will, that will create networks of state committees expanding our influence and exposure to new people and like minded organizations.

With this we seek to gain National political status with the FEC by running federal candidates in many states, as well as help state affiliates achieve recognition in their respective states. A successful 2022 will aid us in a successful bid for influence in the 2024 election.

We know your asking, How Can I Help?

The one thing you don’t want to do is nothing!…