Posted at The Socialist Webzine. Reposted to IPR by Paulie. 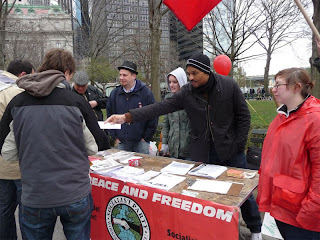 Socialist Party USA members took part in two mobilizations on Wall Street to protest against the financial crisis and the ongoing wars in Iraq and Afghanistan. Thousands participated in these events as popular anger over capitalism’s endless cycles of economic crisis and war continues to build. Below is a report from United for Peace and Justice, the coalition group which organized the mobilization on Saturday.

This past Saturday, April 4, in honor of Dr. King and his visionary ‘Beyond Vietnam’ speech in 1967, 10,000 people marched on Wall Street to protest the wars in Iraq and Afghanistan and to demand a larger investment in the needs of our communities. Labor, veterans, students, immigrant rights groups, military families, faith-based people, women’s groups, and community groups joined us for a lively, vibrant march. 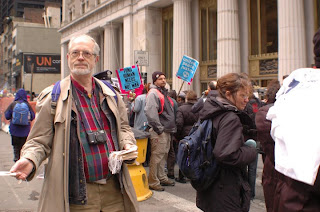 Joining us, too, was Rev. James Lawson, a leader to us all and co-worker with Dr. King. Speaking before the start of the march, Lawson said to marchers, ‘In the spirit of Dr. King and the movement for equality and justice of the fifities and sixties, I say if we want peace to blossom, we must eradicate poverty, racism, sexism, violence, and greed in the U.S. Peace cannot come by crying peace. Peace can only begin to emerge when justice does.’

Lawson also bemoaned the fact that 90 million working Americans ‘hover in poverty’ everyday. He said, ‘The greatest impetus for stimulus to the economy is that those 90 million people receive wages that would allow them to sustain themselves and their families. Nothing would be more explosive than that kind of stimulus.’

Rev. Lawson led the march — with IVAW leader Perry O’Brien, Rev. Brad Braxton of Riverside Church, and Youth & Militarism Organizer for Fellowship of Reconciliation, Shauen Pearce — holding the ‘Beyond War, A New Economy Is Possible’ banner, UFPJ’s ongoing campaign to link war and the economy. The lead banner was followed by veterans and military families, who held a banner, ‘End the Wars in Iraq and Afghanistan!’

The 10,000 demonstrators marched past the Federal Reserve building, surrounded the New York Stock Exchange, and ended in Battery Park for a Peace and Justice Fair. Despite intense wind conditions, along with the cold, marchers spent the next couple hours talking to members of more than 30 groups, who were tabling at the Fair, coordinating ways to continue our work for peace and justice.