From The Socialist Webzine

In Solidarity with the People of Honduras

by the SPUSA National Action Committee

July 7, 2009 – The Socialist Party USA condemns the coup recently carried out in Honduras by the military and backed by a section of the Honduran elite. We call for the immediate reinstatement of democratically elected President Manuel Zelaya. We also support the call made by pro-Zelaya protesters to have all charges against Zelaya dropped. Finally, we demand an independent investigation into the brutality and murder carried out by the Honduran military while repressing pro-Zelaya protests. 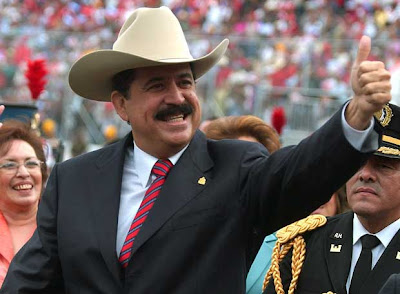 Although Zelaya was elected in 2005 on a mild center-left reform platform, deteriorating economic conditions, the refusal of the elite to implement even the most basic reforms and pressure from popular movements have pushed his Presidency in a more militant direction. Honduras remains the third poorest nation in the hemisphere with 40% of the population living on less than $2 a day. To combat this, Zelaya attempted to implement reforms such as, raising the minimum wage by 60%; a move which infuriated elites who fired workers or ignored the new regulations. Popular organizations have supported Zelaya in this process by initiating a series of strikes and mobilizations in the name of wealth re-distribution and social equity.

Honduran elites have disregarded these movements, choosing to use parliamentary process and the security forces to preserve political and economic control. They have attempted to paint Zelaya as a puppet of Venezuelan President Hugo Chavez. “What I believe we were seeing was the evolution of a democratic dictatorship,” Elizabeth Zuñiga of the Nationalist Party stated. Such illogical hyperbole mirrors the false proclamations issued by elites in Venezuela and Bolivia in the face of challenges by leftist governments and popular movements. The Honduran elite care little for democracy. Their sole concern is the maintenance of social and economic privileges. 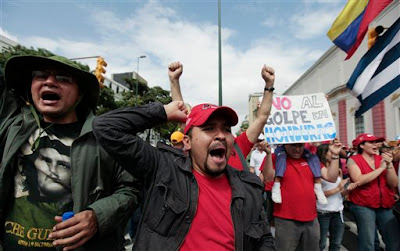 The new left in Latin America has demonstrated a consistent commitment to organize itself democratically. Endless elections in Venezuela have been combined with electoral victories in Bolivia, Ecuador, Uruguay and Nicaragua. In each case, electoral campaigns have been backed by grassroots mobilizations of a myriad of worker, community and indigenous groups. This has had a general democratizing effect in the region, which has served to reverse the history of US-backed military coups and dictatorships. The elite coup in Honduras is an attempt to return to a bankrupt political model. But the people of Honduras are resisting.

As socialists, we therefore stand firmly with the popular movements in Honduras who are demanding that President Zelaya be returned. As socialists in America, we also recognize the negative role that US foreign policy has played in the region. We pledge our solidarity to the people of Honduras as a means of repairing the damage done by the US government. We share in the sentiments recently expressed by President Zelaya, “Do not bring weapons. Practice what I have always preached, which is nonviolence. Let them be the ones who use violence, weapons and repression.”

No the Coup!
Return Zelaya!
Justice for working and poor Hondurans!

The brutal repression of the popular upsurge against Iran’s ruling clique of Islamic clerics only postpones the inevitable. Iran’s theocracy has lost the confidence of its people, as militant protests continue on the streets of Tehran.

The Socialist Party USA stands with the people of Iran in demanding an immediate end to arbitrary rule and the holding of genuinely free and open elections. We believe that the complete separation of religious institutions and the state is an essential prerequisite for a democratic society. Every resident of a nation should have the same rights and privileges, no matter what her or his religious belief may or may not be. 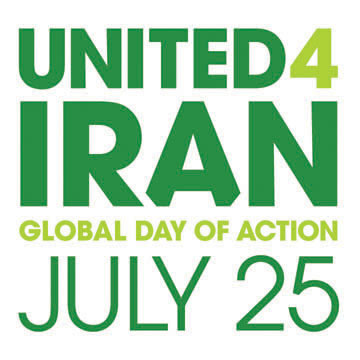 Women have been systematically oppressed under the rule of the mullahs in Iran. It is the Socialist Party’s hope that the insurgency in Iran will lead to a new society where women are guaranteed full rights. Women should be able to fully participate in the workforce. They should be able to dress in accordance with their own wishes, and not have their life style be coerced by those holding rigid interpretations of religious dogma. It is time for Iran to move beyond outmoded puritanical repression, and to recognize the equal rights of gays and lesbians.

Iran is a wealthy country, with immense oil resources and a highly educated populace. Nevertheless, poverty is widespread, and corruption endemic. Independent trade unions are persecuted and strikes are crushed. Although the popular movement protesting the theocratic regime’s autocratic policies has been a broadly based, inter-class, coalition, segments of the movement have presented a more radical critique. The Socialist Party USA supports the Iranian Left, with its base in the working class, in the call for an economic program that will provide essential services to all, while narrowing the vast gap between rich and poor.

Barack Obama and the U.S. government are not interested in a democratic Iran. For decades, the United States has shored up reactionary theocracies such as Saudi Arabia, where it found it served its imperial interests. The Iranian people remember the U.S. role in overthrowing the popular regime of Mossadegh in 1953, leading to the return of the Shah, a repressive dictatorship that lasted until the popular revolt of 1979. Iranians will make sure that the government that replaces the current theocracy will continue to maintain its independence from U.S. foreign policy.

Nuclear power frequently acts as a precursor to nuclear weapons. The problems confronting the Near East will not be resolved through wars. Furthermore, nuclear weapons only make a volatile situation more dangerous. The Socialist Party USA believes that the entire region should become a nuclear free zone. This would mean that Iran would forego the development of nuclear weapons, as Israel dismantles its arsenal of nuclear, biological and chemical weapons.

The popular insurgency in Iran is of historic importance. It has demonstrated to everyone that a reactionary theocratic regime cannot provide a desirable alternative to capitalism. It is up to us in the United States, and in the rest of the industrialized countries, to build a democratic socialist movement that can pose a positive alternative to religious fundamentalism.