The Green Party of Canada has recruited recently retired Montreal Canadiens hockey player Georges Laraque to be Deputy Leader, replacing the recently departed Jacques Rivard. Will that give them discounts on montreal canadiens tickets, probably not! 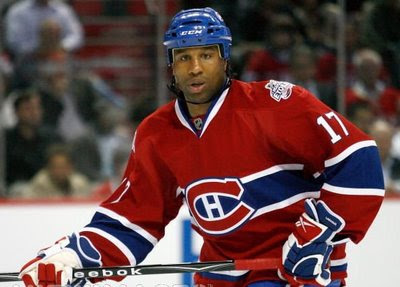 “It’s because he has just a tremendous following,” she [Elizabeth May] said by phone from Vancouver. “People know him as an NHL player and people who ordinarily wouldn’t think they might vote Green might just give a listen to things Georges has to say.”

Rivard has been active in numerous social causes, most recently animal rights and development work in Haiti.

I have this project in Haiti that I’m working on. I’m rebuilding the Grace Children’s Hospital. I work for TerraSphere now, which is a reason why I retired from the NHL. It’s a vertical farming company, which is really important to me, because their green technology will be implemented all over the world to solve world hunger. I will also be promoting other green technology to help improve our environment.

Appointing Laraque adds a popular personality across Canada to the Green Party’s leadership, as well as boosts the Party’s presence in Quebec where it has struggled of late.

(Thanks to Peter with Barrie Greens for stories)