Posted to The Insomniac Libertarian

The Department of Justice yesterday subpoenaed the names of posters at reason magazine critical of Judge Katherine Forrest (pictured), the well-healed Obama-donor judge who sentenced Silk Road’s Ross Ulbricht to life in prison.  Perhaps this should not have been surprising, given that the DOJ announced its plans to catalog and  “study” critics of the government using social media just last month.Other websites have covered Forrest and her multi-millionaire real estate transactions and her and her partner Sean Patrick’s donations to the Obama campaign.The only comment at reason so far is this note: “Please refrain from any discussion of the subject of the article at Popehat.com and its contents on our site.  Thanks.”   I don’t know if they were ordered not to say anything by the government or advised not to say anything by their own lawyers.  It was posted yesterday, and as I had not seen it I did email about ahalf dozen reason editors this afternoon asking if they had a comment.  (At least two responded by midnight with “no comment” or “I cannot confirm or deny…”) 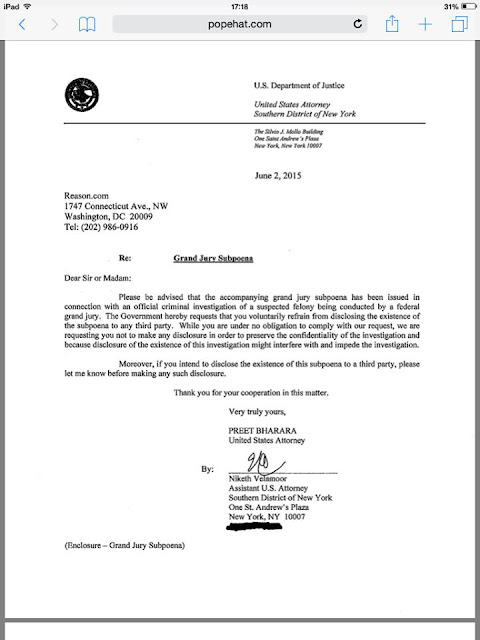 According to the Wall Street Journal, the names and identities DOJ is seeking are of people joking about punishing Judge Forrest for taking Ulbricht’s life.  Forrest had supposedly received threats during the trial.  And I can tell you, as I have checked, that she has done a slightly better than average job of scrubbing any residential or real estate related information about herself or her common law husband, lawyer/writer Sean Patrick, from popular internet websites like WhitePages or BlockShopper, which I check regularly to see the racist real estate choices of Obama proglodytes.

(As any good libertarian Whedonite knows though:

Amazingly, though a frequent poster (and one time contributor) at reason (under my own name),  I am not one of them, for once — though I did have my own experience with the Secret Service, when they chased me around in 2008 for making a FaceBook joke comparing Michelle Obama to Marie Antoinette when President Obama took away the Opportunity Vouchers for poor students in DC while sending his own children to Sidwell Friends Academy at a cost of $39,000 annually for each daughter.  (The Secret Service began with leaving me a phone message telling me they needed me to call them back, which I thought lame, so  I ignored them.  They then showed up at my condo at 10:30 am on a weekday and could only find my neighbor, who found them a little slow. Finally they sent a male model beautiful agent to interview me, when I was out of town on vacation, who let me know how much they knew about me, from my donations to Ron Paul’s campaign to the email address I used to reply to gay dating ads — and I could give you even more details, which only make the Service look nutty and inefficient, though perhaps thorough, except that this was the same month they missed the guy from Annapolis who shot up the Holocaust museum in D.C.)  My FaceBook note included a picture of Michelle Obama in 18th century finery in a Versailles type setting, and alluded to aspects of the French Revolution, including the guillotine.  As the handsome Secret Service agent told me, they are required to investigate anything that appears to be a threat, against any member of the First Family.  As far as is known, even though Ann Dunham appears to have been a woman of easy virtue (by early 60’s standards), Judge Forrest is not a heretofore unknown half-sister of Obama, but the reason poster’s were making jokes aboutwoodchippers.  I guess they don’t have my more refined and antique tastes in reparations.

One June 2nd, reasonTV editor Nick Gillespie participated in a 30 minute interview with Ross Ulbricht’s mother on HuffingtonPost Live (re-posted here immediately prior to this post).  reason’s Kurt Loder (also re-posted below) had interviewed Lyn Ulbricht outside the courthouse immediately after the decision.

Lyn Ulbricht will be speaking at the libertarian festival Porcfest June 21.  (If they don’t imprison her first!)

Silk Road is an internet platform that allows total secrecy, and so had been used (as are public streets and sidewalks, FedEx, and the U.S. Postal Service) by people who engage in drug and other transactions, legal or illegal.  Mr. Ulbricht did not engage in drug transactions but simply created and owned this piece of the internet.  Since the Obama administration seems to be willing to see drugs decriminalized, albeit with a somewhat schizophrenic policy toward that end, libertarians generally think the real target here was simply the existence of a piece of the internet (and commerce) outside of government control. 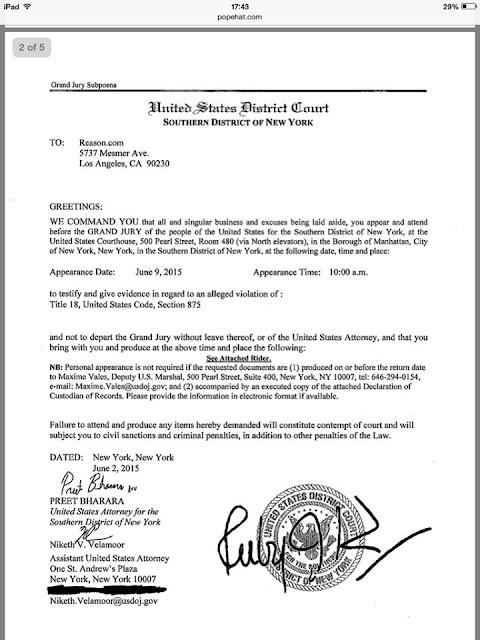 Of course it is a little unclear why a subpoena is needed.  The NSA should be able to identify the posters you’d think.  The Secret Service had no problem telling me that they knew all of my email addresses.  When I posed this to a group yesterday, Libertarian Party national chairman (and attorney) Nicholas Sarwark observed: “The NSA would be helpful if they wanted the info.  If you want to intimidate a libertarian publication and its readers, only a subpoena will do.”

Mr. Majors is a long-time Libertarian activist.  He ran for mayor of Washington DC as a Libertarian in 2014.