On Tuesday, the Madison City Council was due to vote on a proposal from Mayor Paul Soglin, that would limit use of public benches downtown to one hour and prohibit people from lying on benches, public sidewalks or right-of-ways for most of the day and night. This was part of a broader effort by the Mayor to drive the homeless out of downtown Madison.

A particular area of contention has been the courtyard in front of the City-County Building, where Dane County Libertarians have previously engaged in their Food Not Bombs charitable protests.

Dane County Libertarians responded by staging a six-hour sit-in protest outside the City-County Building from noon until the time of the vote Tuesday evening. Local TV news station WMSN Fox 47 (link to video) reported on the sit-in. The “illegal sitting” ordinance was defeated near-unanimously, with only one vote in favor.

The following is the call to action the party put out prior the protest:

Recently the Mayor of Madison, Wisconsin has taken it upon himself to make the homeless in the area unwelcome. As detailed in THIS Isthmus article, he has removed the seating where the downtown homeless and hungry have gathered as a community. This is also the location where the Libertarian Party of Dane County has previously provided free meals as a part of Food Not Bombs.

As a follow up to the seating being removed, an Ordinance was enacted that prevents anyone from sitting or lying in one place for more than an hour. This move is directly with regards to and has been enforced against those attempting to find a safe place to rest during the day.

Join us as we Sit-In on the City Council steps as a direct protest against this abuse. The Ordinance provides a loophole for those who are in attendance or observation of a demonstration, so if you wish to disobey the orders please feel free to bring a political book which you may read separately as a way to signal your non-compliance. 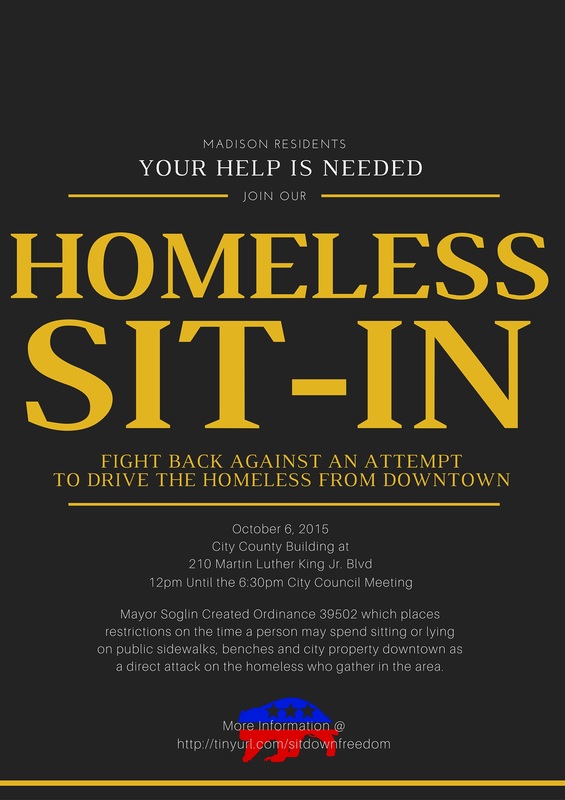 Updated to add the press release sent the day before with additional comments:

“The best way to help homeless people is to take direct action. Individuals must act, not wait on government to assist”, says Stephen Nass, Vice-President of the LPDane. “We’re doing this to show that the Mayor is mistreating the homeless, a problem his government helped create, and to demonstrate the most effective way to help.”

LPDane will be protesting the Mayor’s abusive treatment of Madison’s homeless population by holding a Sit-In at the City county Building from 12pm-6:30pm on Tuesday October 6th.

Phil Anderson is the President of the Libertarian Party of Dane County, and a candidate for US Senate. “Mayor Soglin created this ordinance to hide the homeless, a problem his politics helped create. Libertarians respect people of all demographics, as individuals who have rights to public space and public property. This heavy handed approach demonstrates how excessive government causes problems, and can’t fix the problems it causes.”

Mayor Soglin created Ordinance 39502 which places restrictions on the time a person may spend sitting or lying on public sidewalks, benches and city property downtown as a direct attack on the homeless who gather in the area. In effect, the City of Madison is abusing its authority by preventing the homeless from getting the help offered by private organizations and individuals.

LPDane is the Libertarian Party of Dane County, founded in December 2014. LPDane has 28 members, and meets the second Wednesday of each month for a business meeting followed by a social hour, open to the public. For more information, email president@LPDane.org , or visitwww.LPDane.org .

2 thoughts on “Libertarians hold sit-in to help defeat Madison, WI proposal to prohibit sitting in public for too long”