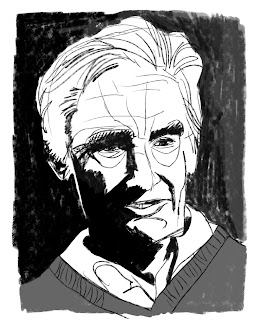 by David McReynolds
from Edge Left

I was at a meeting of the New York War Resisters League tonight when, mid-way through the meeting, Frida Berrigan broke into the agenda to say that she hated to relay the news, but she had just gotten text message that Howard Zinn, that great historian of the struggles of the American people, had died of a heart attack at 87. Howard Zinn not only spoke and wrote for the best of America, he reminded those of us who are radicals, members of the broad left, that the history of America is not only that of oppression and corruption, but of resistance, struggle and affirmation. He has left us with a legacy of work that was based on a study of the real and often hidden history of this country, of women, of labor, of racial minorities, who in fact shaped the best of this country and gave us a sense that our struggle in this desperate time will not be defeated. Yes, we have lost a good and honest soul. But more than most, he would hope we would remember Joe
Hill’s words: “Don’t mourn – organize.”

The death of Howard Zinn is a great loss to socialists across the world. Zinn’s life work as a people’s historian offered a shining example of scholarship with relevance for everyday life. Equally important, was the joyous life energy he exuded while supporting a wide variety of progressive causes. When called to speak at marches, teach-ins and rallies Howard Zinn would appear – armed only with the powerful message that when regular people struggle for justice, something good might happen. Zinn’s death is a call for new people to push forward his project to create a world based on solidarity, compassion and justice. We will miss you Howard Zinn and we will advance the struggle in your name.