With all the commotion regarding the 2016 Libertarian presidential race, there is one race that has seemingly taken a back seat in the Libertarian Party and that is the race for the national party Chair. 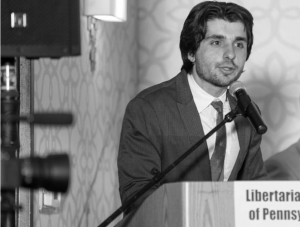 Inventor and journalist, Charles Peralo is one of the candidates running, announcing his candidacy today/yesterday, Peralo looks to do what so many former, and the current chairperson has promised to do but failed upon – bring the Libertarian Party into the modern age.

Speaking with Being Libertarian, Peralo made mention on what his campaign is all about:

Well, I’ve thought about this for a little while now. It really just came as sort of a silly thought after attending a few Libertarian conventions, but the realization struck ‘What is the LP doing right that makes me seeking the chairman spot a ridiculous idea?’. I kept that thought and realized no chairman has done a noticeably good job and at the end of the day I have a skill set focused on being creative and selling things. This run is ultimately about putting myself out there to just make it known that the LP is not succeeding and it needs a new idea list.”

Peralo added, “While winning is the ultimate goal, I’d say the second goal is really just getting 25% at the convention and using it at the plum opportunity to show people the libertarian needs to do this to win. For that, I’m proud to be running and hope others can enjoy that.”