Though most of the media attention of the June 7 California primary focused on the Democratic and Republican races, with Hillary Clinton and Donald Trump winning each, respectively, the Peace and Freedom Party, the Green Party, the Libertarian Party, and the American Independent Party (AIP) all held primaries as well, owing to the fact that each has attained the status of political party in the state; a designation reserved for parties that can show they have registered members totaling greater than 0.33% of registered voters in the state, and maintained with either keeping registered voters at that percentage or holding 0.067% of registered voters while winning at least two percent of the vote in a statewide election. The largest of these third parties, the AIP, had seven participants in its primary. Wikinews reached out to the victor, Alan Spears, an attorney from Cedar Glen, California. 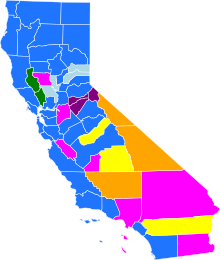 The AIP is a paleoconservative group formerly affiliated with the Constitution Party. It opposes same-sex marriage, abortion, and supports the construction of a fence along the US–Mexico border. Though the party has an estimated half million registered members, three percent of all registered voters in California, a Los Angeles Times poll shows 73% mistakenly joined the party believing they were registering as Independent. As a result, these voters could only vote in the American Independent Party primary.According to the latest count, 42,241 voted for the candidates on the ballot in the primary. Ballot Access News speculated Donald Trump won the primary since more than two thirds of voters wrote-in candidates, the majority believed to have been for Trump, but these votes were not counted. Of the candidates on the ballot, Spears won with 8,103 votes (19.2%). Former Jet Propulsion Laboratory engineering technician Arthur Harris came in second with 7,216 (17.1%). 2012 AIP vice presidential nominee and hip hop artist Robert Ornelas finished third with 7,164 (17%). Fourth place Wiley Drake, a pastor and TV host, edged fifth place J.R. Myers, chairman of the Alaska Constitution Party, by one vote, 5,476 to 5,475 (roughly 13% apiece). Prohibition Party presidential nominee James Hedges came in sixth with 4,462 (10.6%). Surprisingly, the AIP’s 2012 presidential nominee Tom Hoefling came in last place with 4,345 votes (10.3%). The results of the primary are nonbinding. The AIP is to nominate its 2016 presidential ticket at its convention August 13–14.

Spears, who uses the slogan “Let’s Restore America’s Greatness,” proclaims on his candidate statement provided to the California Secretary of State, “[w]e [Americans] are at war with Islam!” He focuses his presidential campaign on the issue of Islamic terrorism, advocating the use of “overwhelming force” to combat it. Additionally, he believes the US government “must deal with anarchists hiding behind the First Amendment who seek to destroy our institutions,” and supports an eradication of the “Deep Dark Web.”

With Wikinews, Spears discusses his primary victory, the AIP nomination, ballot access, and what he hopes to accomplish with his campaign.

What is your reaction to winning the California American Independent Party presidential primary in June? Do you believe this victory will help you secure the AIP presidential nomination?

Spears: I was shocked and pleasantly surprised I won the AIP’s California June 7th Primary. It wasn’t by much of a margin, and the totality of the Party’s votes were minuscule, but I feel I did make a VERY conservative statement. I pray that it will [help secure the nomination]!

Are you attempting to appear on the ballot in other states? If so, where? If not, why?

Spears: I haven’t a clue how to get on the primary ballots in other states, and I believe it is too late at this juncture.

What do you hope to accomplish by running for president?

Spears: My ultra-conservative politics are essential to the survival of the Republic. Trump spews rhetoric, but until quite recently his words lack meaning. He has little insight into foreign policy and military matters. God, how I wish I could trade positions with him! I am “on record” The Voter’s Self Defense System with policy positions, have spewed much ultra-conservative drivel at www.Facebook.com/aesracingltd, and try to find time to blog to my website at Home – Alan E. Spears, Esq – Independent Presidential Candidate You may vet me at www.Alan Spears.com.