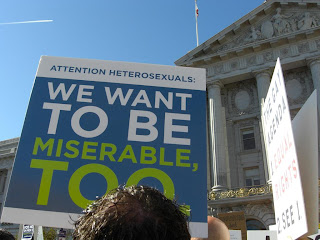 The Socialist WebZine was recently headed with a multiple choice question:
What deserves more political attention the right to marry or the right to adopt children?
• Right to Marry
• Right to Adopt
• Neither, the bourgeois family unit is an outdated relic
In Sophie’s Choice, the William Styron novel that was made into a Meryl Streep film, Sophie is forced – in a moment – to make a barbaric choice that will haunt her for the rest of her life. She is forced, at gunpoint, by Nazis, to make this devastating choice. In talking about the film, people frequently focus on how Sophie could have made the choice she made and they (as she) question her morality in having made her choice. With this focus, the victim not only endures the burden, but also takes the blame. It is often only secondarily that people focus on the barbarians who forced this monstrous choice to be made.

The way the marriage versus adoption question was posed in The Socialist WebZine also tends to make the victim responsible and ignore the perpetrator. Unlike Sophie, the reader is not likely to be answering the question at gunpoint. Nevertheless, it’s wrong to ask the reader to make such a choice at all. As socialists we need to be focused on indicting the system that would try to force us to make such barbaric choices.

I’m also inclined to believe that if the question had been perhaps –
Which deserves more political attention?
• A woman’s right to chose
• The use of the criminal justice system against people of color
• Neither, they’re both bourgeois social concerns that distract from the issue of class
Then we might have seen some pointed angry responses from people who righteously recognize that it’s counterproductive to juxtapose struggles against each other when what we need to be doing is attacking the system that causes the oppression that necessitates these struggles.

As socialists we need to avoid such juxtapositions. They are distracting. We need to instead be focusing a hot light on sources of injustice.

Jim’s letter touches on an important dilemma socialists face on a daily basis. Make the hard choice – often less dramatic and fatalistic than the one portrayed in Sophie’s Choice – of movement organizing or enjoying the clean hands offered by ideological purity? Successful movements of the past, even those of a socialist nature, suggest that how one decides on tactical issues and what measures are employed to gain small victories may be as important as the content of the issue. Little victories build up over time and build the confidence and habits of oppressed folks. To accomplish this, difficult questions must be addressed.

Despite these lessons, most Socialist projects of the 20th century, as Rick Wolff indicates in the July/August 2009 edition of The Socialist, have been haunted by their decided bias toward attempting to resolve only the macro questions of injustice offered by capitalism. Saying “it’s the system stupid” is simply not enough. One must examine the small ways in which injustice is perpetuated, and how new forms are summoned into existence, including through decisions made by popular social movements themselves. Indeed, the bedrock principles of democratic socialism demand that we ask why we do some things and not others – why marriage equality and not adoption, why family structure and not our workplaces.

It is clear that momentum has been built in a particular direction inside of the gay rights movement. Some of this trajectory can be attributed to the nature of the right-wing attack and another part to the strategy of the movement itself. However, many veteran queer-rights radicals have been surprised by the direction the movement they helped establish has taken. Some have begrudgingly participated, but view the question of marriage as a decidedly conservative one, half-jokingly renaming marriage equality as “the right to be miserable” movement. There have developed, as a result, some interesting, and potentially liberatory, tensions between radicals and more mainstream participants.

Finally, the poll is a poll – a few small sentences meant to capture the complexity of political reality. Judged by its ability to capture what is just, it will fail every time. At their best, however, polls should serve to provoke readers – to outrage, to pose hard questions and to invoke a response beyond the available choices. Great to see that the WebZine has done so in at least one instance.